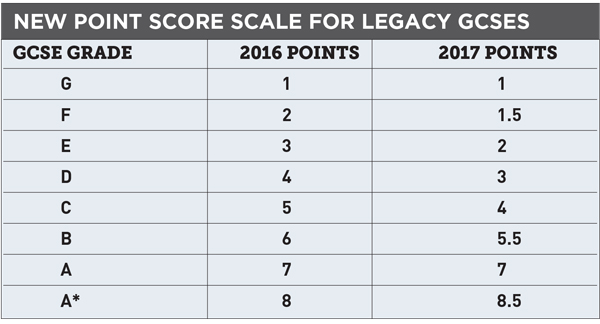 Schools adding value around the bottom of the ability range during the transition from legacy GCSEs to the new 1 to 9 grading system will get “significantly less recognition” within the new Progress 8 headline score, claims the leader of a successful academy trust.

Progress 8 aims to capture the progress pupils make from the end of primary school to the end of secondary school. It will replace the current five A*-C GCSE grades, including English and maths, league table measure and will be one of the main ways schools’ performance will be compared
from 2016.

But the executive head of the David Young Academy in Leeds, Ros McMullen, told Schools Week that planned changes to GCSE point scores when grading moves from a letter to a numerical scale in 2017 for English and maths will unfairly lower the Progress 8 score of low ability pupils. Ros McMullen: “schools will be rewarded for working with the more able”

Progress 8 is calculated for each pupil by comparing their average grade across eight subjects at key stage 4 with the average grade of all pupils nationally who had
a similar prior attainment. It is calculated using assessment results from the end of primary school, with individual scores
then combined to achieve one score for
a school.

In 2016, there will be one point score allocated to each grade. But in 2017, when the new grading scale kicks in, a student moving up a grade from A to A* receives
a point score increment three times that of someone moving from a G to an F grade (see table).

Crucially, there is a 1.5 point gain for a student who gets an A* rather than an A, while a less able student moving from a G to an F grade would gain only half a point.

These scores are then factored into a schools overall Progress 8 measure, which will be a main performance indicator for school. A low score can mean a school is required to become an academy, or be taken over by another sponsor.

Ms McMullen said: “The issue hinges on there being fewer exam marks between an F and G grade than there are between an A and a B. They (the Government) believe there is less stretch and so it is worth less. But – it’s just plain wrong.”

In 2018 most GCSEs taken at 16 will be in reformed subjects. Ms McMullen added that the issue “won’t exist by 2019 because the weighting will have shifted – but there is a big problem in the interim phase and it looks unfixable”.

Her concerns were echoed by head Vic Goddard of Passmores Academy in Harlow, Essex who worries that leaders will be encouraged to “game” their results. Vic Goddard: “there could be pressure to concentrate on higher-achieving pupils”

“There could be pressure to concentrate on higher-achieving students. I hope this isn’t the case for the majority of heads, but some are under so much pressure that (gaming) is an option they might be tempted to take”.

Ms McMullen said the effects of the transition period would “encourage people to game, as the schools will be rewarded more for working with the more able. That takes us to a dangerous place in many ways”.

A spokesperson for the Department for Education said the concerns were “misleading”, and that the new system was “actually fairer for schools with pupils who may be expected to get lower grades”.

He added: “Pupils are compared to others at a similar level, and every increase in grade attracts additional points in school performance tables – a vast improvement on the existing headline measure where only the achievements of pupils working at the C/D grade boundary are recognised.”

There are no plans at present to change the point score weightings.