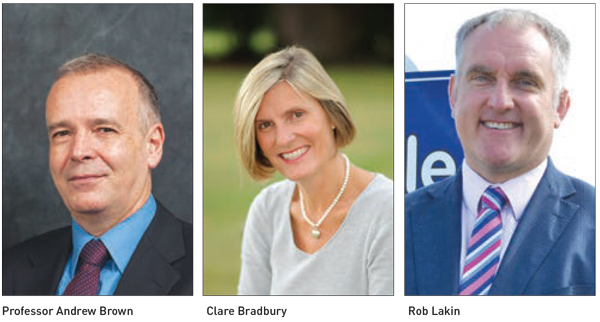 Professor Brown, 59, who takes over from January 1 next year until a permanent replacement is found, says he wants to “maintain the institute’s prestigious identity” and “oversee that it continues its excellent teaching and research”.

The former headteacher joined the IOE in 1987 and has held many roles within the organisation, including working on the PGCE programme and then international consulting on teacher development in countries such as Kenya, Singapore and Hong Kong. He is currently pro-director of academic development

His main passion, however, is encouraging people to study alongside teaching, something that he did while completing his PhD at the institute.

He studied education at the University College of North Wales before completing his masters in the sociology of education.

Clare Bradbury takes up her first headship with her appointment at Oakwood Preparatory School in Chichester.

She has spent the past 18 years teaching at nearby Westbourne School, serving the past four as deputy head.

At her new school Ms Bradbury is keen to “develop non-cognitive skills” to give pupils the right preparation for “life beyond the school gates”.

With this in mind she has introduced a number of pastoral initiatives, including a VIP scheme in which a child is selected randomly in each class every week to celebrate them for “who they are” as opposed to what they have achieved.

“It emphasises the importance of every individual in a community,” Ms Bradbury says.

The 43-year-old studied psychology at Lancaster University before completing a PGCE at Oxford.

She then spent some time teaching in Spain and Thailand.

Rob Lakin, the new leader of Yewdale Primary School in Carlisle, is another headteacher who believes it is a priority to instil “character and resilience” into his pupils.

The former head of Dauntsey Academy Primary School in Wiltshire says that he wants to nurture “independent thinkers” by creating a “fully broad and balanced curriculum ensuring that they [the pupils] become global citizens.

“For me, some schools hot-house towards tests. I don’t do that. We need to teach the children the skills to tackle things that life throws at them beyond secondary school.”

The contracted Ofsted inspector has also become director of primary education within the William Howard Trust, the sponsor of his new school.

Originally from the Midlands, Mr Lakin played professional rugby in his younger days before torn knee ligaments forced him to give up.

After a brief stint in IT recruitment, he completed a degree in behavioural sciences at the University of Wales before going on to do his PGCE.