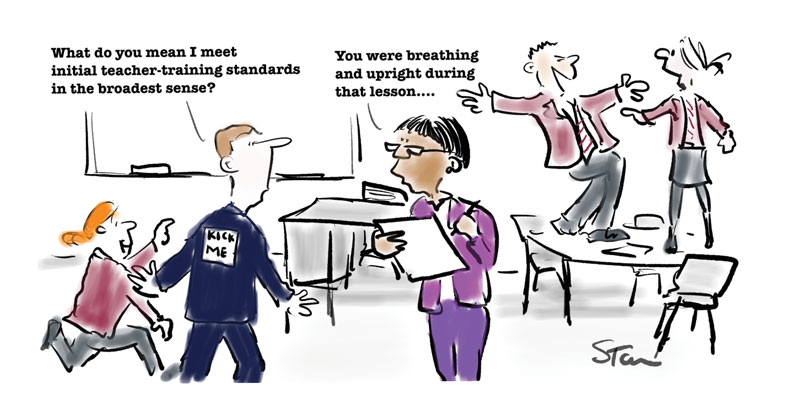 The bosses of the two biggest teacher-training organisations in the country have warned against using private providers which aren’t subject to the “acid test” of Ofsted inspections.

Emma Hollis, the executive director of the National Association of School-Based Teacher Trainers (NASBTT), said at a conference on Monday there was a “real danger” that companies advertising for new recruits might only meet initial teacher-training standards “in the broadest sense”.

All organisations that provide teacher training are overseen by Ofsted, but a number of private companies fall outside its remit as a result of a loophole separating assessment from course provision.

One such private recruitment agency, Castles Education, this year launched a two-year mentoring programme in schools, which allows graduates to work in a school and gain qualified teacher status via an assessment put on by an accredited provider at the end.

The idea is to encourage graduates in English, maths and science who might not otherwise be ready for a PGCE into secondary and primary teaching, said a spokesperson.

All training routes, no matter what they are, should be Ofsted-inspected

They said the programme meets many of the initial teacher-training requirements. For instance, it has “rigorous selection criteria” in place, which it demonstrates by accepting just 11 per cent of the 350 graduates who applied this year.

But although Castles Education, which does not count itself as a teacher-training provider, meets the initial teacher-training criteria, it is “not expected to, as we are not the awarding body” for QTS, the spokesperson said.

The company is now seeking an awarding body for its first graduating cohort in 2019.

But Hollis believes all programmes should be inspected by Ofsted to make sure they meet ITT requirements, such as ensuring applicants have cleared criminal checks, a degree, and have worked in two schools before gaining QTS.

If Ofsted does not oversee them, these routes will “lack the acid test of a rigorous inspection process”, she claimed.

Her words were echoed by James Noble-Rogers, the executive director of the Universities’ Council for the Education of Teachers (UCET), who believes new providers are welcome in the market but should be “properly accredited and regulated”.

Another company, Premier Pathways, also offers a fully-funded two-year training programme leading to QTS. It is now on its third cohort of 135 for 2019, said a spokesperson, who said the company is “essentially” operating a teaching apprenticeship.

At the end of the programme, the teacher is assessed and given QTS by the University of Buckingham’s School of Education.

As the university is inspected by Ofsted, trainees on Premier Pathway’s programme are inspected too, a spokesperson said.

But the route used by these companies, of having an accredited body signing off on QTS at the end, was not designed for people just starting out in the profession.

The “assessment-only” option for QTS launched in 2009 to allow teachers trained overseas to easily convert their qualifications into one recognised by English schools.

“It was for people who already had a lot of experience in independent schools or overseas,” Noble-Rogers said.

The Department for Education also describes assessment-only routes as being for “experienced” unqualified teachers.

But Premier Pathways reject the notion they are an assessment-only route and pointed towards the PGCE completed by particpants over the two years, delivered in partnership with the university.

“We believe our students benefit from far more HEI pedagogy than any other route currently available,” a spokesperson said.

“All training routes, no matter what they are, should be Ofsted-inspected,” Noble-Rogers insisted.