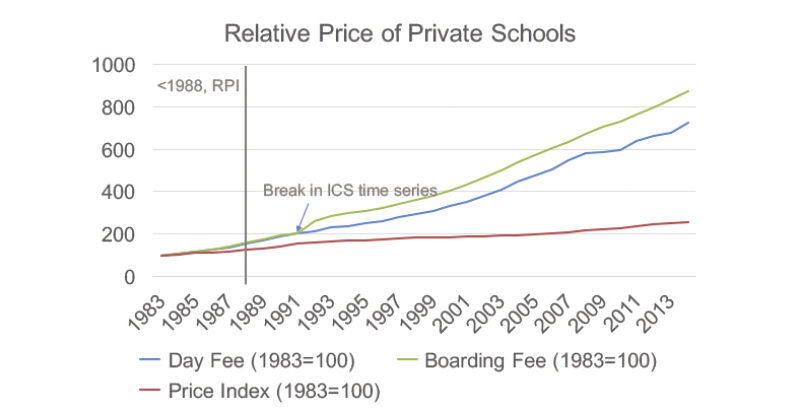 Private schools are bumping up their fees while state school funding remains flat, widening the attainment gap between the state and independent sectors, academics have claimed.

Research published this week by the UCL Institute of Education, titled The labour market benefits of private schooling, has found that fees within the private sector have increased well above the rate of inflation (see graph).

Researchers said private schools had used some of the extra cash to modernise facilities – resulting in private school pupils having three times more spent on them than their state school counterparts.

Anna Vignoles, professor of education at the University of Cambridge and a co-author of the report, said: “We’ve been looking at adults whose private schooling happened two decades ago. But what we can see is that the resourcing levels within private schools have increased exponentially since then.”

Her research found adults in their 40s who had been privately schooled on average earned 35 per cent more than those from the state sector.

“The advantage 20 years ago was big, and if resourcing is increasing we can expect that advantage to become greater too.”

Previous research by Professor Francis Green of the UCL Institute of Education, who also contributed towards the new report, found private schools were investing more in their facilities.

£12,200 is spent annually on a privately schooled pupil, compared with £4,800 on a state school pupil

According to his research, about £12,200 is spent annually on a privately schooled pupil in primary school, compared with £4,800 on a state primary school pupil.

Green said parental demand had led private schools to modernise their facilities to keep up with the competition, pushing up fees to a level that only the very wealthy could afford.

“Parents are prepared to pay these higher and higher fees. So schools compete with each other to provide better facilities – a state-of-the-art theatre or Olympic size pools.”

Vignoles said: “There is no evidence that teachers in private schools are necessarily better. But the class sizes are two-thirds of what they are in a state school. Better teacher pupil-ratios are crucial.”

A spokesperson for the Independent Schools Council, which represents more than 1,200 private schools, said citing money as the reason for higher educational outcomes was “over simplistic”.

“Fees have increased but schools are very mindful of the struggles hard-working families can face in paying them.

“That said, pupil numbers continue to increase, both those paying full fees and those receiving fee assistance, often paying nothing at all. The more pupils who pay, including those from overseas, the more bursaries can be offered. This creates demonstrable social mobility.”