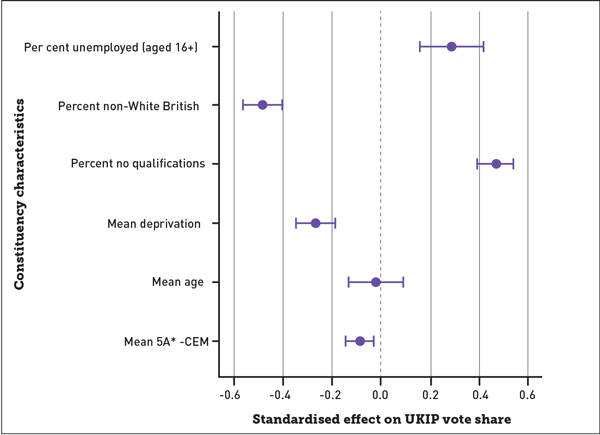 New research that suggests regions with underperforming schools are more likely to have the highest numbers of UKIP voters has sparked heated debate in education’s Twittersphere.

But research author Dr Meenakshi Parameshwaran, of think tank LKMco and Education Datalab, says it’s time to wake up to “the uncanny relationship between UKIP voting and education”.

“Whatever the causes of the relationship . . . it is clear that we cannot continue to ignore areas of the UK where educational performance is low, and where voters feel endorsing UKIP is the best way to improve things for themselves.”

She analysed vote share and educational data for the 533 English constituencies, finding that areas with higher UKIP vote shares tended to have lower average GCSE performance.

“Whilst there are some outliers, the negative relationship between areas of educational underperformance and UKIP voting is undeniable,” she said.

“It is also quite a strong relationship, with every quarter of a per cent reduction in average GCSE performance significantly associated with a rise in local UKIP vote share by 1 per cent.”

The findings were contested on social media, with many observers stating that numerous factors could explain the relationship between UKIP vote share and GCSE performance.

But a second study by Dr Parameshwaran, published last week, found that “constituencies with better GCSE performance have lower UKIP vote shares, even after accounting for local levels of education, unemployment, deprivation and ethnicity”.

She told Schools Week: “Whilst my results might have surprised some people, those familiar with research on educational and social disadvantage already argue that radical reforms are needed to end the persistent structural inequality that is driving support for UKIP.

“In particular, more needs to be done to break the cycle of educational disadvantage, such as providing extra support to those children whose parents struggle both financially and educationally.”

Ian Martin, a primary school teacher in Leeds, has also investigated the relationship between pupil premium and community cohesion. In his research for his masters degree, he found that school experiences of parents may be a factor, more so than current school underperformance.

“Many working-class parents told me that they feel their experiences are not understood by people in positions of authority, and that their own, often unhappy or at least underwhelming, experiences of school mean they feel the same about the culture within many (but not all) schools.

UKIP was approached for comment on several occasions, but did not respond before Schools Week went to press.