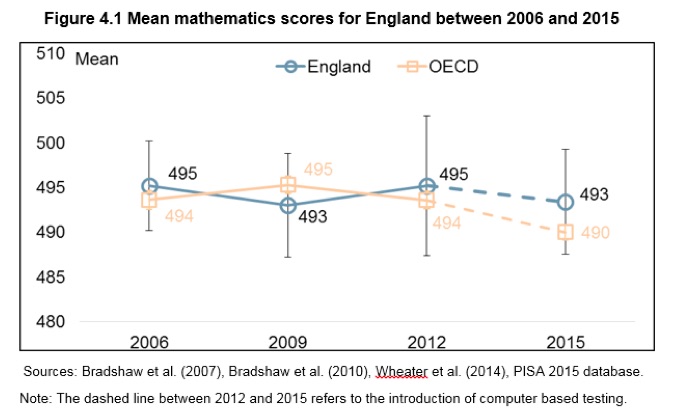 English pupils have not improved their PISA scores for almost the last decade, according to an international data set released today.

Though they have managed not to fall in performance, as seen in other high-performing countries.

English pupils about to take their GCSEs are strongest in science, just above average for reading (with girls outstripping boys) and at risk of leaving low achievers behind in maths, results from the Programme for International Student Assessment (PISA) tests show.

The PISA tests in England were conducted from November to December 2015 on 5,194 pupils from across 206 schools, with roughly the proportion of each school type represented.  Every cycle has a particular focus, science takes its turn this year.

Here are 11 key things we learned:

1. England hasn’t improved its scores for almost a decade

Despite some respectable scores, PISA shows there has been no significant change in England’s average maths, science or reading score since 2006.

In science pupils scored an average mark of 512, compared to 516 nine years ago but this is still considered stable.

Other countries have seen a downward trend in science over that time, including Finland, Australia, New Zealand, and the Netherlands.

In reading, the average reading score this year was 500, compared to 496 in 2006. For the first time this year, owing to changes in other countries’ scores, we are significantly, but only just, over the OECD average for reading.

Maths also remained the same this year at 493 compared to 495 nine years ago. Italy, Portugal and Russia caught up in that time.

2. Science is our strength – though it isn’t evenly distributed

Our 15-year-olds scored 10 points or more ahead of 52 other countries in science – including Scotland, Wales and Northern Ireland.

Only nine other countries were at least 10 points ahead in their average science scores than English 15-year-olds.

England has always been strong on science “since 2006” according to a government note, so this isn’t that much of a surprise.

The spread of strong performance is far from equal, though. The government’s national report notes that top-achieving pupils are “more likely to be white or mixed ethnicity and are disproportionally clustered in selective state or independent schools.”

3. We remain far behind some countries in maths, but average for the OECD

There are 18 countries whose average maths score is at least 10 points ahead of us, and we remain 20 points or more behind the seven east Asian countries: Singapore, Hong Kong, Macao, Taiwan, Japan, China and South Korea. These are the top-performers internationally.

A number of European countries outperform us in maths including: Estonia, Finland, Slovenia, Poland and Ireland.

4. We have “low achieving” pupils whose maths scores are not improving

In reading, we have slightly fewer “low-achievers” by PISA standards in reading (at 18 per cent compared to the OECD average of 20 per cent).

But in maths, our lowest-achieving 10 per cent of pupils get a score more than 20 points below their low-achiving peers in several other European countries, including Poland, the Netherlands and Germany.

Low performing pupils in Northern Ireland and Scotland also do “significantly better” than their peers in England, despite similar average maths scores overall.

In science, the bottom 10 per cent of performers score lower than the lowest performers in the top-performing countries. White pupils in England score between 25 to 40 points more in PISA’s science, maths and reading tests than their black and Asian peers.

This is at odds with GCSE results, where Asian pupils get similar if not higher grades than their white peers.

The government’s report notes that while a “prominent issue in English education policy concerns the performance of the white working class”, the results from PISA science show working class white pupils perform at similar levels to working class pupils of other ethnicities.

It is advantaged white pupils that both the white working class and ethnic minority pupils perform significantly worse than, according to the data.

6. Our headteachers use data more than their best colleagues abroad

PISA also put questions to headteachers. It found that headteachers in England are much more likely to “regularly use pupils’ performance results to develop their school’s educational goals” – at 61 per cent versus just 18 per cent of headteachers on average across the top 10 countries.

7. Science is the only subject in which boys and girls are equal

Boys and girls achieve almost exactly the same average score, 512, on the PISA science test – in contrast to science GCSEs, where a higher proportion of girls (72 per cent) entered for science GCSEs achieve A* to C grades than boys (67 per cent).

The same finding occurred in year 9 in the Trends in International Mathematics and Science Study (TIMSS), with boys and girls in this age group performing similarly, and is also typical of most countries.

In contrast, girls consistently outperform boys for reading by a difference equivalent to nine additional months of schooling – a trend that has remained the same over time and is also similar to most other countries.

The gender gap in mathematics is less pronounced, with boys achieving an average 12 points higher than girls. 8. Ofsted judgments can ‘predict’ how well pupils do

Pupils at ‘outstanding’ schools get scores similar to pupils in some of the high-performing countries.

Their average maths, science and reading scores are also significantly higher than for young people who attend schools in the bottom two Ofsted categories – ‘requires improvement’ and ‘inadequate’.

That difference is equivalent to around two years’ worth of schooling, the government’s national report said.

However, there was no significant difference in performance between pupils in ‘inadequate’ and ‘requires improvement’ schools.

9. Lack of physical infrastructure is a problem for headteachers

Almost half of England’s headteachers said a lack of “good quality physical infrastructure” in their schools was hindering learning, compared with just a third for the average OECD country and top-performers.

10. Second-generation immigrant children do as well as pupils with parents born in England

The achievement gap that exists between pupils from immigrant backgrounds and native-born immigrants “all but vanishes” once the second generation is born.

But the difference persists between native pupils and first-generation immigrants, particularly in science.

That gap is smaller in England than in some countries, including Sweden and Denmark, but some countries have no difference at all, such as Canada and New Zealand.

The issue of recruitment, already highlighted by the TIMSS data last week, is repeated here in PISA.

Of the high-performing countries, only two complain of teacher shortages more than English headteachers: Japan at 55 per cent and China at 64 per cent.

Across the OECD on average, our pupils are 15 percentage points more likely to be taught in schools where headteachers see recruitment as a problem.

Nor is this equally a problem across all schools: headteachers who lead independent schools are much less likely to report teacher shortages as a factor hindering instruction than in our other schools.