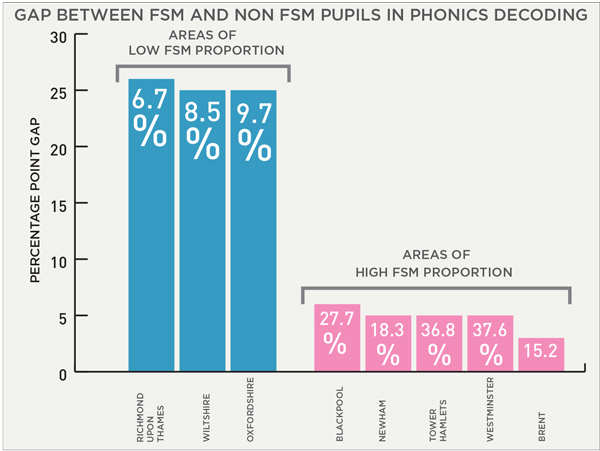 Disadvantaged pupils in wealthy local authorities are not catching up to the reading abilities of their peers, show the latest phonic check results.

The screening check, introduced in 2012, is an individual, oral assessment of pupils that requires them to read words and pseudo-words.

But analysis of the latest checks, released last Thursday, show that although the national average has crept up, local authorities (LAs) with a small proportion of pupils eligible for free school meals (FSM) are not narrowing the gap between them and their peers.

Schools minister Nick Gibb, however, has hailed the results as they meant 120,000 more children were “better prepared to become strong leaders.

“For years, children were being denied the joy of becoming fluent readers because of a reliance on teaching methods that failed too many children.

“We will continue to challenge those local authorities whose phonics results are below the levels achieved elsewhere.”

Differences across the country are stark.

Richmond-upon-Thames, in south London, has the largest gap. Just 6.7 per cent of its year 1 pupils are eligible for free school meals, one of the smallest proportions in the country. But only 62 per cent of its year 1 FSM pupils met the expected level of phonics decoding this year. The number of non-FSM pupils achieving the same benchmark was 88 per cent. The national average is 77 per cent.

The only LAs with a smaller proportion of FSM pupils are Rutland, Wokingham, Windsor and Maidenhead, and West Berkshire. All, but Rutland, have a gap of more than 20 percentage points between the achievement of disadvantaged children and their peers.

The national average is 14 percentage points.

However, when Schools Week contacted Richmond, Oxfordshire and Wiltshire, all three councils failed to answer why such a large gap persisted.

Rebecca Allen, director of Education Datalab, has highlighted the trend for areas with smaller numbers of disadvantaged students struggling to close.

In a blog Ms Allen said that at GCSE level, pupils in disadvantaged areas were all coming from the same “social or educational background”, whereas in wealthier areas, the background of non-FSM pupils varied drastically.

LAs with high proportions of FSM pupils typically had closer achievement rates. In Tower Hamlets, east London, where almost 40 per cent of year 1 pupils are eligible for FSM, there was just a 5 percentage point difference between FSM pupils and their peers; in Blackpool, where 28 per cent of pupils have FSMs, the gap was 6 percentage points.

Tower Hamlets council put its success down to in-school pupil progress meetings and schools being aware of the pupils who received pupil premium funding.

A spokesperson said: “These great results are partly due to the fact that we provide very specific central training for each phase of phonics. We run in-school training where we model lessons for teachers and teaching assistants.

“The support for pupils in this area begins at the very earliest stage, where we ensure a structured phonics programme is delivered across our early years’ provision, including nursery schools.”