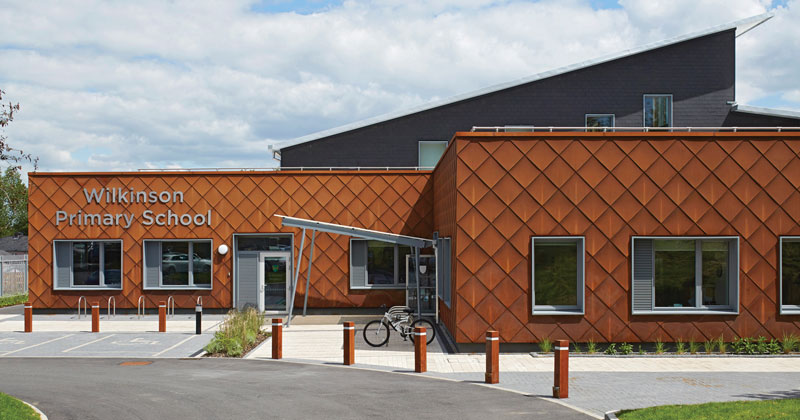 The first secondary school to use energy-saving Passivhaus design principles is set to be built for the Harris Federation in south London.

Its design could help to reduce costs by 70 to 90 per cent “post-completion” compared with a normal school, Schools Week has learned.

Eleven schools in England are built on the architectural principle developed in Germany in the early 1990s– the first batch, Oak Meadow, Bushbury Hill, Swillington and Wilkinson primary schools (pictured), were set up in the west Midlands from 2012.

The heating bill at Oak Meadow dropped from £45,000 to £5,000 after moving into its Passivhaus school.

The phrase translates as “passive house”, with the buildings using mechanical rather than natural ventilation, as well as recycled fibres, nearly air-tight spaces and triple glazing, which cuts the need for central heating. Millions of pounds have been spent on building the schools. The Willows primary and all-through special school in Wolverhampton cost £15 million, compared with between £500,000 and £6 million for the acquisition and construction of other primary schools, according to the Department for Education’s most up-to-date 2014 data.

But Wilkinson primary cost £5 million, which is less than the £6 million cost of the new Eden primary school in north London. The “standard expectation” is for schools to save at least 70 per cent on long-term operational costs compared with a school built to standard regulations.

Ben Humphries, director at architecture firm Architype, which is designing the Harris free school in Sutton, claimed that pupils felt “more alert” because rooms did not have “the stuffy feeling that occurs in afternoon classes, generated by artificial heat and light in conventional schools”.

She said energy efficiency was a “long-held goal” of the Department for Education, although some schools were currently in long-term deals with energy companies that “may have punitive get-out clauses”.

The savings come as schools face 8 per cent budget cuts in real terms over the next four years, according to the Institute for Fiscal Studies.

Sutton council, which owns the site on which the new secondary school is planned to open in September next year, commissioned the Passivhaus design last year. Planning application approval for the 1,200 pupil school will conclude in the next few months.

But the “complexity” of the former hospital site means there will be additional costs, said the team at Architype.

However, Humphries said each school so far had been completed within the allocated local authority budget.

A spokesperson for the Harris Federation said that savings on energy costs meant “more money can be spent on children’s education”.

Another secondary school, Parliament Hill in north London, also has planning permission for a 6,000sqm Passivhaus-designed extension to go ahead.