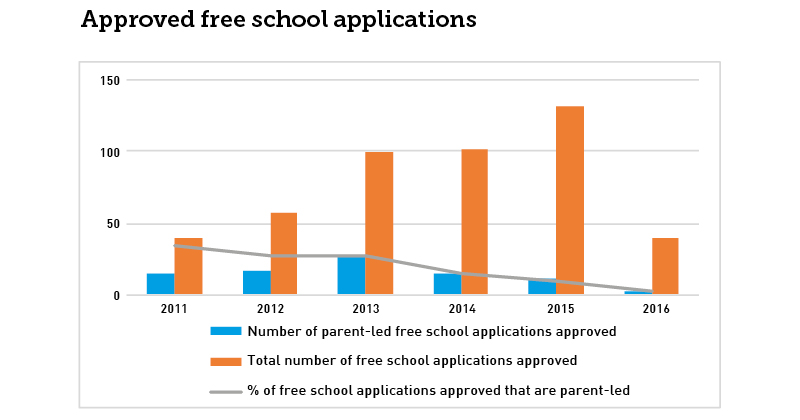 The future of free schools as independent, standalone institutions is in doubt as new rules requiring academies to join or establish trusts bed in.

Figures also show a steady decline in the proportion of approved applications from parent-led groups over the past five years.

And the desire set out in the government’s white paper for schools either to become part of or set up a trust, or at the very least provide “support” for another institution, means bids for standalone schools are even less likely to be considered in future.

Analysis by the Labour party of the first ten waves of free school applications shows the proportion of approved applications from parents has declined from 35 per cent of bids in 2011 to 9 per cent last year.

So far this year, just one of the 40 applications approved by the Department for Education was from parents.

The pro-free schools New Schools Network (NSN) is now actively reminding teachers that they can launch schools is a further sign of a shift.

In 2011, Gove, then education secretary, described the policy as a way of “meeting parents’ desire for a good local school – a school that’s easy to get to, that feels like part of the community”.

But Lucy Powell, the shadow education secretary, said it was “increasingly clear” that the government’s original concept of a free school was “all but dead”.

She said: “The Tories have all but abandoned the concept of parent-led schools, and are instead overseeing a huge expansion of academy chains opening new schools.”

Powell said the findings of her party’s research would come as a surprise to “parents and many in the Conservative party” who, she claimed, were still being “sold an untruth” about the expansion of the programme.

Both the government and the NSN have sought to reassure critics that the policy remains a method by which individuals can set up schools.

Nick Timothy, the network’s director, said that more than 70 per cent of free schools had been set up by teachers or existing schools, and that parent or charity groups proposing free schools needed to demonstrate they had “first-rate professional advice from an experienced, senior teacher”.

“This is why we are currently campaigning to remind teachers that free schools offer the best way to set up their dream school,” he said.

Timothy said many free schools were already working in partnership with other establishments, but standalone schools could still open. He also insisted that uniformity wasn’t a “desirable end” for the policy, and that he expected to see “some schools in big chains, some in smaller chains and some that may not be in chains at all”.

A government spokesperson said free schools were “at the heart” of a drive to “spread educational excellence everywhere”, and insisted they were “proving highly popular” with parents.

“We have opened more than 300 free schools and plan to create at least 500 new schools by 2020 – offering more choice of a good local school for parents than ever before,” the spokesperson said. The government welcomed applications from parents and community groups, and had “no plans to change this”.