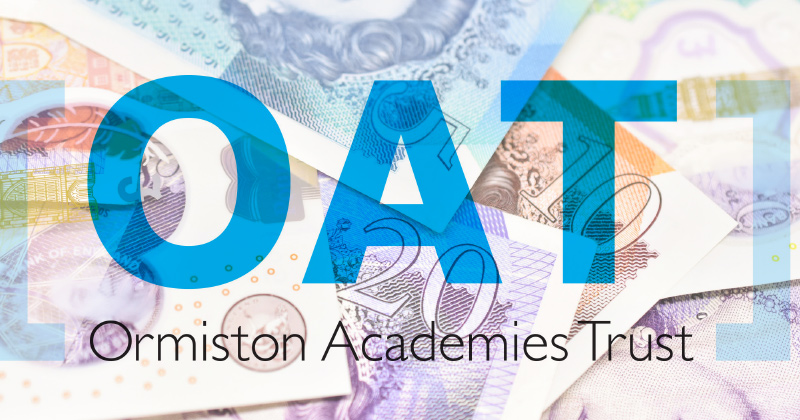 One of the country’s largest multi-academy trusts was lent more than £1 million by the government to help “cash flow management” last year, the second such settlement it has negotiated to takeover struggling schools.

The interest-free loan, one of two the trust has received in recent years, does not have to be paid back for nine years.

I see it as a positive story, that you can get the ESFA to work with you

Some interest-free loans paid to trusts are accompanied by a financial notice to improve that is made public.

However Ormiston said the loans were not to help with financial problems.

Phil Reynolds, a senior manager at education accountants Kreston Reeves, said that as there was no indication that Ormiston’s financial trouble was caused by “poor performance, governance or management”, it was not unusual that it had not received a financial notice to improve.

A report by auditors last year warned there seemed to be a “pool of money” available to certain trusts because of their “powers of persuasion”.

But Reynolds said it was the “right thing” to notify the ESFA if a trust was struggling with its cashflow or falling pupil numbers.

“I’d imagine there has been some discussion going on. There would have to have been as the ESFA don’t just give large sums of cash out,” he said.

“I see it as a positive story, that you can get the ESFA to work with you.”

Ormiston’s 2017-18 accounts, published earlier this month, state that the “financial environment … continued to be challenging”, with all academies identifying “economies and efficiencies wherever possible”.

A spokesperson for Ormiston said the latest loan was to “support the conversions” of two academies, built using PFI contracts.

She said the trust would not have been able to take on the Ormiston Meridian Academy, near Stoke-on-Trent, in September 2017 without a loan from the ESFA because of the school’s precarious “financial position”.

Wodensborough Ormiston Academy, in the West Midlands, joined in 2013 when its pupil roll was “well below capacity”. Although it was now oversubscribed, the trust approached the ESFA for a short-term loan as it “takes several years for those student numbers to feed through into funding”.

But accounts show the trust has had another interest-free loan from the ESFA. It has four years to pay back a £320,000 loan to help with low numbers at the Endeavour Academy.

Ormiston’s spokesperson said it was an “extremely well-run trust” and the loans would be repaid “over the agreed periods”.

It is not the only trust to receive such loans.

For example, in 2016-17 Delta Education Trust received a £480,000 government advance to its general annual grant as part of a “recovery plan”.

A spokesperson for the Department for Education said “in the most serious cases, the ESFA may provide additional funding to protect the education of children.

“Academy trusts are expected to repay any additional funding once they have reached a stable financial position.”

Correction: Schools Week has amended this article to make clear that the loan was not paid as part of a bailout.