Secondary school teachers have higher rates of Covid-related deaths than the general working age population, but the differences are not “statistically significant”, the Office for National Statistics has said.

The ONS has today published its analysis of Covid-related deaths by occupation. It found that 139 teachers, senior education professionals, education advisers and school inspectors died between March 9 and December 29. Over the same period, 46 teaching assistants and educational support assistants died.

However, the ONS said the differences “were not statistically significantly different than those of the same age and sex in the wider population”. 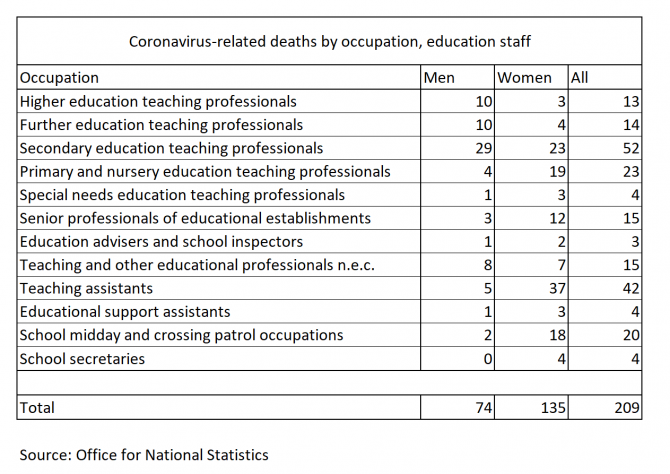 When looking at the death rate overall among teaching staff – 18.4 deaths per 100,000 men and 9.8 deaths per 100,000 women – the ONS said they were “statistically significantly lower than the rate of death involving Covid-19 among those of the same age and sex”.

The ONS also compared teaching occupations with all other professional occupations to see “how the deaths compare with professions with similar broad economic and educational backgrounds”.

Again, it found Covid-related death rates were “not statistically significantly different to the rates seen in professional occupations”.

In contrast, death rates among social care workers “were statistically significantly higher” than those of the same age and sex.

The data comes amid a growing debate over whether or not school staff are more likely to catch Covid-19 than other professions.