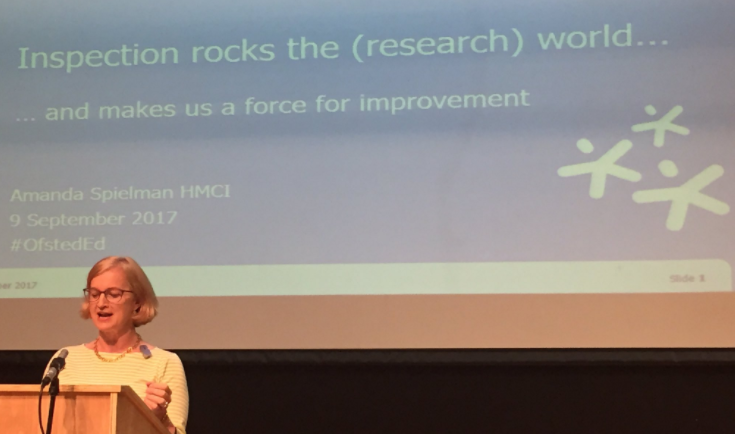 Ofsted is considering a new approach to book scrutiny, in which off-site inspectors will look at scanned versions of pupils’ books.

The watchdog’s chief inspection Amanda Spielman gave a speech at the fifth annual national conference of ResearchED today, in which she explained areas of development she will be focusing on in the coming months.

She described book scrutiny as “something which is very useful when it is used in the right way” in one of the closing sessions at the event.

“Like so many things, you put too much weight on it and it buckles, use it in the right way – it’s really valuable,” she said.

“There are things we can do to isolate the book scrutiny process – both to test whether inspectors’ conclusions are consistent with each others’, and whether it gives a valid picture of teaching quality and pupils’ progress.”

Spielman added that new scanning software could also be used to share book scrutiny amongst inspectors, rather than leaving it to the individual visiting the school under inspection.

“There’s rather good scanning quality now, so the views of other inspectors, remote from the live inspection, could be drawn in to test out the judgments of inspectors on site,” she said.

“That could be used both in the context of a particular inspection, for training and for research processes, and to test the overall reliability and validity. We might get several things from the same bit of scrutiny.”

Spielman said this scrutiny could also be used “to evaluate curriculum quality” to “make sure we have the kind of curriculum that we want across the full range of subjects”.

She discussed Ofsted’s current curriculum review and explained some of the areas currently under examination, which she said are hard to explore in individual inspections.

“Our main focus this year is the curriculum, which is especially important for pupils form disadvantaged backgrounds.”

Spielman stressed that “this is not about creating an Ofsted prescribed curriculum” but added “inspection does have to be able to evaluate whether a curriculum is working well”.

“It’s not an introduction of preferred styles by a backdoor,” she reassured delegates.

The first round of field work on the curriculum review is complete, she confirmed, and said her first commentary could be expected “later this month”.

Spielman also said an Ofsted survey had found “there isn’t really a good shared language for discussing the curriculum”.

“Even the most commonly used terms seem to mean different things to different people, so we’ll be doing some work on that,” she added.