Ofsted is now issuing caveats to schools retaining their grades in short inspections, a practice experts warn is establishing an unofficial “sub-grade system” that confuses parents and demoralises teachers.

An analysis of new inspection reports found more than 60 schools which maintained ‘good’ or ‘outstanding’ grades in Section 8 inspections were warned “inspectors have some concerns that standards may be declining”.

There’s a pattern, it seems systematic and you start to question if there is a sub-grade system

The caveat receives top billing under the “outcomes” section at the top of reports (see image).

Ofsted stated that recognising improvements or noting falling standards has long been part of its service, but said that its new reports make it “even clearer for parents”. 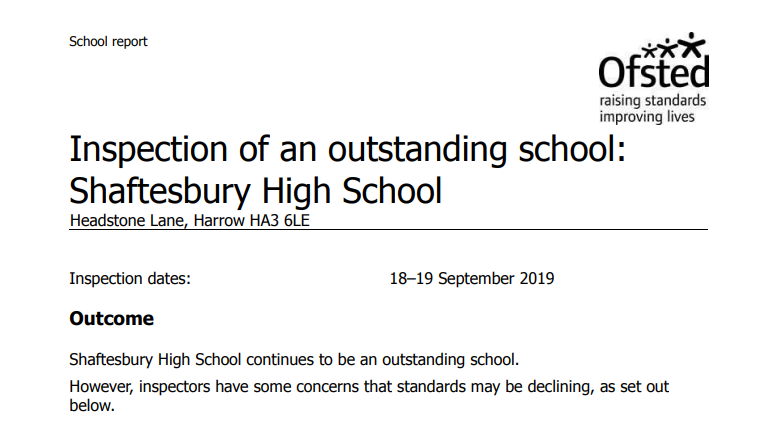 If it finds evidence that standards are declining or improving then a full section 5 inspection is arranged within two years of the section 8 inspection.

However, Karen Wespieser (pictured), director of operations at education charity Driver Youth Trust who analysed the reports, said: “There’s a pattern, it seems systematic and you start to question if there is a sub-grade system.”

She said it is understandable that Ofsted is seeking “more nuance because the grades are very black and white”, but added that sharing the criticisms “in such a public way undermines the overall grade… It makes it seem as though the inspectors aren’t sure in their judgment.”

Overall, Ofsted raised concerns about five schools that kept their ‘outstanding’ grade and 61 that remained ‘good’.

Shaftesbury High School, in Harrow, was one of those to retain its ‘outstanding’ grade, with the caveat, after a September inspection.

Matt Silver, headteacher at the special school, said the report was a “psychological punch” which “overshadows the ‘outstanding’ status that was given”.

The headteacher, who is currently studying for a doctorate in positive psychology, said the phrasing questions the competence of the staff instead of providing constructive criticism.

“We openly acknowledge there are still areas to improve on, but that’s not ‘declining standards’ in my book.”

Silver claimed the lack of clarity was confusing for parents and hindered the school’s ability to market itself effectively. He wrote to parents following the report to reassure them and explain that the terminology was part of Ofsted’s new framework.

However, Ofsted also issues caveats showing that schools are improving. Ten schools rated ‘good’ were found to show evidence “the school could be judged ‘outstanding’” if a section 5 was carried out.

Stephen Rollett, curriculum and inspection specialist at the Association of Schools and College Leaders (ASCL), added the “inclusion of a blunt caveat… may seem contradictory and confusing to parents, as well as being demoralising for staff”.

“Unfortunately, the juxtaposition of a positive judgment with a negatively worded caveat is not helpful.”

ASCL is now urging Ofsted to review its approach. Rollett added: “Brevity does not necessitate bluntness and it must be possible to make it less stark.”

An Ofsted spokesperson denied that the approach taken in the reports was new and said: “Our inspection reports have always set out clearly whether a school is performing well, or whether standards have declined.

“Our new-style reports make it even clearer for parents to understand what it is like to be a pupil at the school and the quality of education on offer in a school.”

This episode is the latest example of the watchdog’s new inspection framework coming under scrutiny.

The inspectorate admitted last month that pupils from deprived backgrounds are still less likely to be judged ‘good’ or better under the new inspection framework. Ofsted had promised that its new regime would reward schools in more challenging circumstances.

Meanwhile, many schools are ditching running three-year GCSEs after some were criticised for the practice. Critics have claimed this calls into question Ofsted’s assertion that it has no “preferred curriculum”.