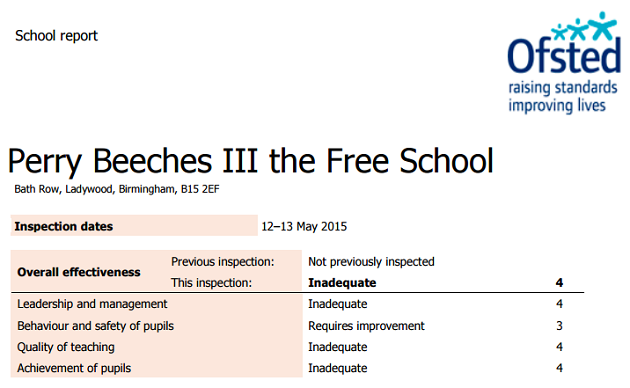 A free school in Birmingham has been dubbed inadequate and placed into special measures by Ofsted, just weeks after its leader lambasted other schools across the city.

The Perry Beeches III, part of the Perry Beeches Academy Trust, received the lowest inspection grade for the quality of teaching, leadership and management, and pupil achievement. The school was also told the behaviour and safety of pupils required improvement after inspectors visited in early May.

The school is in its second year of operation and employs 23 teachers, teaching 225 pupils in year 7 and 8, and 10 sixth formers.

Almost two fifths of pupils are disabled or have special educational needs, and two thirds are eligible for pupil premium funding. Both measures substantially exceed the national average.

Inspectors began their visit on May 12, just three days after Perry Beeches executive principal Liam Nolan told the Birmingham Mail that he could “really see a difference that free schools are making” to an “otherwise disastrous picture of education” in Birmingham.

But the school’s Ofsted report criticises the school for under-achievement, lack of progress, inexperienced governors and an “unrealistic” view of the school among leaders.

Of the 23 teachers at the school, the report states that about half are “inexperienced or recently qualified”.

The inspection outcome represents a departure from success for the Trust, which had its flagship Perry Beeches I academy rated outstanding by Ofsted in March 2013 and Perry Beeches II, a free school, also receiving a top grade last year.

It will also lead to a closer eye on the Trust’s next two free school projects – Perry Beeches V and VI – due to open in September.

In a letter to parents, executive principal Mr Nolan said: “Let me say how deeply sorry we are that some of you may feel let down by this report. We do not want to lose your confidence or trust. We hope you will see the seriousness with which we take this situation.”

He said that new leaders at the school had drawn up a “rigorous plan of action” in response to the grading. Schools Week understands that Darren Foreman, the headteacher at the time of inspection, is no longer in post.

The inadequate rating will lead to increased scrutiny of the government’s flagship free school policy. Before the election David Cameron pledged to open 500 more over the next Parliament but high-profile failures, such as Durham Free School and Discovery New School, were both closed within an academic year.

A Department for Education spokesperson said that Mr Nolan and the Perry Beeches free schools were “transforming the life chances of children in Birmingham”.

She added: “The performance of Perry Beeches I and II have set the bar for schools across the rest of the country.

“Swift action has already been taken to change the leadership of Perry Beeches III and to turn around the performance of the school.”