Ofqual decided against making it harder for English pupils to achieve a grade 4 this year, despite its National Reference Test showing an “unexpected” slump in attainment from “less enthusiastic” pupils.

National Reference Test results were published for the first time today. The NRT requires a sample of Year 11 pupils to sit tests in English language and maths so the exams regulator can measure changes in performance over time – which Ofqual can then use to decide whether to  make any adjustments to GCSE grade boundaries.

The NRT’s annual statement, published this morning, reveals there was a “statistically significant downward change” in the proportion of pupils achieving the pass mark – grade 4 – in English language.

“This is unexpected, and not consistent with the small improvement we might expect to see in the first years of a new qualification, as teachers become more familiar with the requirements,” the report said.

This year – the third year of the tests – Ofqual said it would consider the results to decide whether to make any adjustments to grade boundaries. However the regulator decided not to intervene.

Although Ofqual said it believed “there could be a case to make a small downward adjustment to the grade standards” which would result in slightly higher grade boundaries (meaning fewer pupils would have got a grade 4 or above), it said it had “always been clear that we would be cautious in using this evidence”.

Interestingly, the study also appears to confirm concerns from schools that the new curriculum is turning pupils off English. Entry rates for A-level English subjects fell 13 per cent this year.

Ofqual said that it seems likely pupils taking the English NRT were “less motivated to do well” and also “less enthusiastic about English more generally, but it is not possible to quantify the potential impact of this”.

“Lower motivation might explain some of the apparent decline in results, but, given that the changes in survey results were small, it seems unlikely that it would explain the entirety of the change in English results.”

The NRT tests show that in English 65.8 per cent received a grade 4 or above, down from 68.8 per cent last year. Although grade 7 and above remained comparatively stable, dropping slightly from 16.8 per cent to 16 per cent, there was also a drop at grade 5 or above from 52.8 per cent to 49.8 per cent.

But Ofqual said: “For us to make an adjustment in only the third year of the test, based on results in English that are unexpected, we would want to be confident that we were not at risk of interpreting statistical noise and/or NRT behaviour change as a real change in the anticipated GCSE performance.

“Given that we could not be confident that these results would actually be reflected in poorer performance in GCSE English language, we decided not to make any adjustments for English in 2019.”

GCSE results, released today, show results for English language for 16-year-old pupils in England actually rose slightly. This year, 70.5 per cent of all English grades were a grade four or above, up from 70.2 per cent last year, while the proportion reaching level 7 or above fell slightly from 17.5 per cent to 17.4 per cent.

The report said English language students taking the NRT this year reported lower views of “the utility value and importance of the subject”. 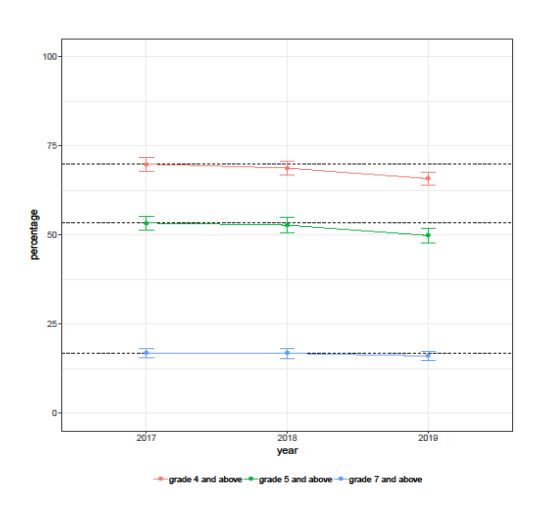 The NRT also showed performance in maths has improved slightly, as expected in the third year of teaching the reformed qualifications.

Pupils in a sample of approximately 300 schools in England sit the NRT each year. It is designed to measure changes in performance over time, which might otherwise be difficult to detect. The test uses the same questions every year, based on the sorts of questions used in GCSE English language and maths exams.

The NRT in 2017 was benchmarked against the first awards of the reformed GCSEs. Tests compare pupil performance with the performance of pupils in 2017.