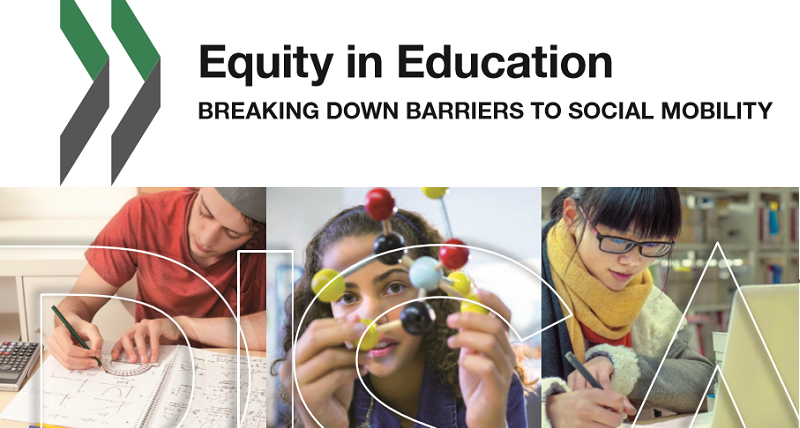 Policy makers must target extra resources towards schools supporting large numbers of disadvantaged pupils, according to a new report.

The ‘Equity in Education’ paper from the Organisation for Economic Co-operation and Development (OECD) examined barriers to social mobility, and suggested governments should set “ambitious goals” for disadvantaged students and direct additional resources at their schools to drive improvement.

The report revealed that across all OECD countries, the socio-economic gap in maths performance among 10-year-olds was largest in England, Korea, New Zealand and the United States. In England these inequalities also grew “markedly” between adolescence and early adulthood, the research said.

It also found the average science score in the PISA 2015 tests among socio-economically disadvantaged students in the UK was 84 points lower than that of advantaged students – a gap equivalent to almost three full years of schooling. The average gap across all countries was 88 points.

However, performance differences between advantaged and disadvantaged students have narrowed across the OECD country over past PISA cycles, the research acknowledged.

The PISA tests, which take place every three years, were the cause of controversy last month, when schools minister Nick Gibb hit out at the OECD for being “too political”. Despite his stance, English pupils sat the tests this autumn, with results due at the end of 2019.

Today’s report made a number of suggestions for tackling inequalities, including reducing the concentration of disadvantaged students in particular schools, promoting better communication between parents and teachers, and encouraging parents to be more involved in their child’s education.

Teacher training should focus on how to identify students’ needs and manage diverse classrooms, the research added. Schools could also try to “foster students’ well-being”, by emphasising the importance of “investing effort and using appropriate learning strategies”, and encouraging them to support each other through peer-mentoring programmes.

Dr Mary Bousted, joint general secretary of the National Education Union, welcomed the recommendations and said the report should act as “a wake-up call to the government”.

“[The government’s] so-called school ‘reforms’ since 2010 have not only failed to achieve their stated aim of raising education quality, they have significantly widened inequality and entrenched disadvantage throughout a child’s schooling and into adulthood.”

Andreas Schleicher, OECD director for education and skills, said: “Too little headway has been made to break down the barriers to social mobility and give all children an equal chance to succeed.

“More investment is needed to help disadvantaged students do better, including recognition of the critical role that teachers have to play.”

A Department for Education spokesperson: “We want every child to grow up healthy, happy and able to reach their potential, no matter what their background.

“The attainment gap between disadvantaged pupils and their peers, as measured by the attainment gap index, has narrowed by at least 10 per cent since 2011, and we’re targeting extra support at the poorest areas of the country to raise standards in schools and attract great teachers.

“Earlier this year the education secretary also set out his plans to boost social mobility by improving education support for children before they start school.”