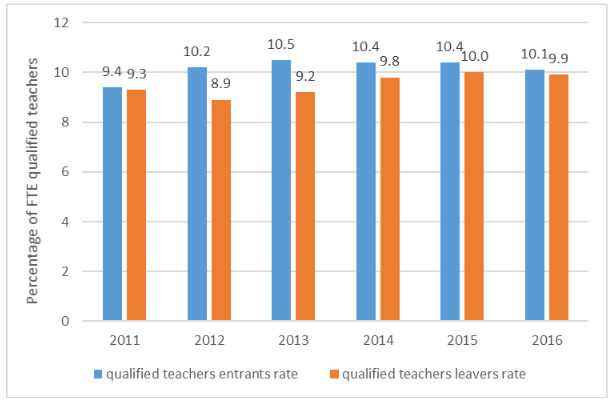 The number of new teachers entering the profession in England has dropped to its lowest rate in five years – while vacancy rates continue to rise.

School Workforce Census figures published by the Department for Education today show the number of full-time equivalent entrants to teaching has decreased from 45,120 (10.4 per cent) in 2015, to 43,830 (10.1 per cent) last year.

Meanwhile the number of schools with at least one advertised teaching vacancy has risen.

As reported by Schools Week, the 2015 figure was the largest drop-out rate of teachers in a decade.

The DfE points out that between 2011 and 2016, the rate of entry into teaching has remained higher than the percentage of qualified teachers leaving the profession (see main image).

However the falling new teacher rate comes as the figures show there was a 0.3 per cent rise in the number of vacancies for full-time permanent teachers in state schools.

A further 3,280 full-time posts (0.9 per cent) were being temporarily filled by a teacher on a contract of at least one term, but less than a year.

The number of secondary schools with at least one advertised vacancy or temporarily-filled post rose from 23 per cent in 2015, to 27 per cent last year.

A Department for Education spokesperson said: “We have a record number of teachers in our schools – 15,500 more than in 2010. The number of new teachers entering our classrooms outnumbers those who retire or leave, and there are more teachers returning to the profession.”

However they added: “We know that some schools are facing challenges and we are working constructively with the sector to put programmes in place to address them. At the 2015 Spending Review, we announced we would invest £1.3bn up to 2020 to attract new teachers into the profession. This includes a range of generous bursaries to attract high quality graduates and the expansion of Teach First into every region of England.”