The government has published its annual survey of newly qualified teachers, and for the first time includes their experience of workload.

The survey, completed by 1,639 NQTs who qualified between December 2015 and November 2016, found that almost 30 per cent found their workload was bigger than they’d been expecting.

And while half were encouraged to reduce unnecessary planning, a smaller proportion were told to try to reduce their data management duties.

Overall, more than 80 per cent rated their training as pretty good or better.

1. Over a quarter of trainees surprised by workload size

For the first time, NQTs and trainees were asked about their experience of workload.

A large proportion (65 per cent) had some sort of discussion about workload with their training provider or school, and of those two-thirds felt the workload was the same as they’d been expecting.

But 28 per cent felt the workload was bigger than they’d been expecting.

Just over half (52 per cent) felt they were encouraged to get rid of unnecessary planning and preparation, and just under half felt the same about marking.

But much fewer were expected to reduce their data management duties. Only 38 per cent reported being encouraged to cut down on data entry time.

Teach First trainees were more likely than other trainees to report that workload was what they’d been expecting, even though they were less likely to have discussed it beforehand. 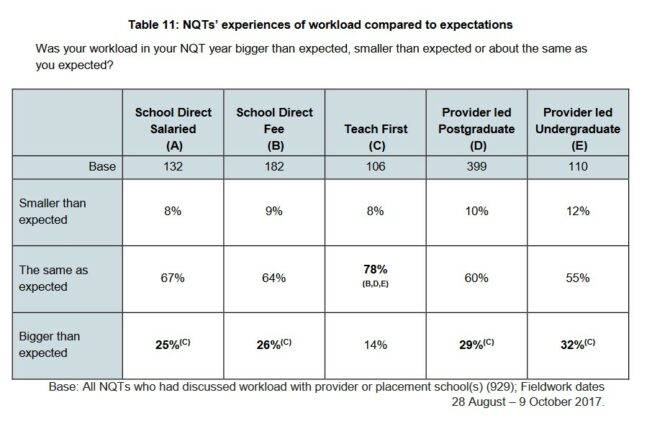 2. NQTs are more positive about their induction than in 2016

But 43 per cent gave their induction year a higher rating of 9 or 10, which is in fact higher than for the previous survey, when only a third did so.

Just one in five gave a rating of 6 or below for the overall quality of their initial teacher training.

But the most positive were those on “school centred” ITT routes, and the government’s own School Direct route, with a mean score of 8.25 and 8.15, compared to 7.66 overall. 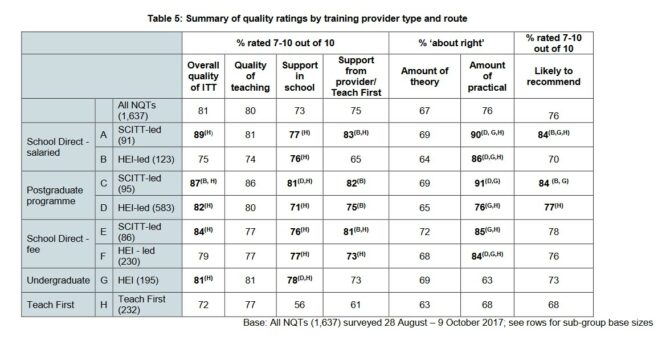 On broader issues, NQTs felt prepared to teach after their training. For example, 80 per cent felt prepared on planning good lessons, and 91 per cent on safeguarding and professional conduct.

But only 40 per cent felt prepared to assess the progress of SEND pupils, and to teach pupils with English as an additional language.

The same proportion felt prepared to teach reading and comprehension in secondary school, while almost 60 per cent did not.

The most common means of finding out about teacher roles was through placement schools – three in ten of those in a full-time teaching role found out about their role from the school they trained at.

Meanwhile 22 per cent found out through teaching press/ or websites and 21 per cent did so through local authority websites.

“Despite the challenges of recruiting graduates in a strong economy with fierce competition for graduates in other professions and industries, last year we recruited over 32,000 trainee teachers, up 3 per cent from the previous year.”