Not all teachers are professional, and it is up to heads to identify those who don’t do their best, Sir Michael Wilshaw has said.

The former chief inspector of schools returned to the stage today at the Festival of Education for a grilling from the television personality Piers Morgan.

1. Not all teachers are professional

Quizzed about his decision to paint some teachers as “lazy” during his tenure as chief inspector, Wilshaw defended himself, and claimed it was “shorthand for saying ‘take performance management seriously'”.

He said the teaching profession was “very defensive” about his comments, but that he stood by them.

Wilshaw also spoke about the controversy he caused when he called for parents to be fined for not attending parents’ evenings, and said some were more committed to their children’s education than others.

“The reason why London schools are doing so well, apart from good headteachers and good teachers, is because a lot of the immigrant families care about education, they value education, they support their children.

“I’m working in parts of England with white British populations where the parents don’t care. Less than 50 per cent turn up to parents evening. Now that’s outrageous.”

Following an announcement from Wilshaw’s successor Amanda Spielman that Ofsted plans to assess whether schools are hiding the worst behaved pupils from inspectors, including through strategically planned school trips, Wilshaw was pressed about the prevalence of such behaviour.

He said inspectors “sometimes” get conned by schools, and said it would be “foolish” to say Ofsted gets it right all the time.

“Sometimes inspectors, and particularly poor inspectors, and we did have quite a few when I first arrived there, couldn’t see what was obvious and had the wool pulled over their eyes. But I think the quality of inspections has improved enormously over the past few years,” he suggested.

On Wilshaw’s watch, the notice period for inspections given to schools reduced from 48 hours to less than one day, and he admits he toyed with the idea of no-notice inspections, but decided against them.

“The problem with unannounced inspection is that headteachers, particularly good headteachers, are often out and about supporting other schools, and they want to be there for inspection, that’s natural. And it would be impossible to see governors and parents if you just walked in.” 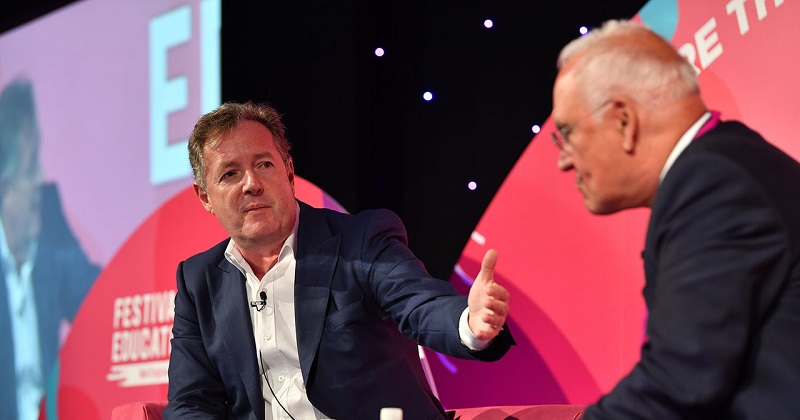 4. Our school system is ‘mediocre’

England’s school system is not as good as its international competitors because not enough is done about the “long tail of underachievement”, especially among poorer children.

“It’s a mediocre system,” he said. “We are mediocre, and it’s foolish to claim otherwise. Otherwise we’d be much higher up the PISA league table, we would be up with the South Koreas and with the Shanghais and some of the best European nations like Poland for example. So we are mediocre,” he insisted.

“We’re mediocre because we’re not doing enough about the long tail of underachievement, which is one of the worst in the OECD, made up mainly of poor children, mainly made up of white British children from low-income backgrounds.”

The school system is also struggling as a result of a lack of investment in teachers, Wilshaw said.

“We’re not paying them enough money,” he told festival-goers. “And in some cases we’re paying headteachers too much money for delivering mediocre standards. We need to get that balance right.”

He predicted that while money will “pour” into the NHS in the coming years, “very little” will go into schools, and this will lead to a fall in educational standards.

“We need to worry about standards slipping,” he said. “I think standards have improved radically over the last 20 to 30 years, certainly since I started to teach. There’s a real danger now that standards will start to slip because of a lack of funding and because we’re not addressing the key issues.”

7. No love for Love Island

Asked by Morgan if he thought that Love Island was “the single biggest threat to the education of our young people”, he was not complimentary.

“Listen, I caught five minutes of it the other day, and I was absolutely appalled. it’s a sad reflection of our nation’s education system,” said Wilshaw.

8. Mobile phones should be banned from all schools

The way schools govern the use of mobile phones is topical at the moment, after a senior minister called on more heads to ban them.

Schools are already free to restrict or ban the use of phones on their premises, but Wilshaw said today that ministers should go further and impose the ban on schools.