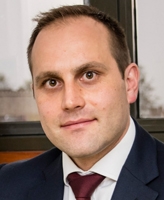 The number of students achieving five or more A* to C grades, including English and maths, has risen from 58 per cent in 2013 – the same year the school was rated inadequate by Ofsted – to 74 per cent this year, according to provisional figures today.

It’s the third year running the school, taken over by Inspiration Trust in November 2013, has posted improved GCSE results.

Principal Gareth Stevens (pictured) said: “We are delighted with this year’s results, which are the highest in the school’s history.”

He said the rise in the past two years was “phenomenal”. “Results across the board are evidence of the high expectations, determination, resilience and hard work of both students and staff, for which they must be highly commended.”

More than 25 students also achieved straight A* or A grades.

The school is yet to be inspected by Ofsted since becoming an academy.

Another Inspiration Trust school, East Point Academy, has posted a three per cent rise in the number of pupils achieving five or more A* to C grades.

It rose slightly from 32 per cent last year to 35 per cent this year. The school was rated inadequate until March this year, where Ofsted inspectors rated the school as requires improvement.

Principal Kevin Blakey said: “This year’s results show progress across the board, with a 8% increase in the number of students getting 5 GCSEs A*-C and particularly strong performance in English and Maths. Our staff have all worked exceptionally hard in this transitional year, supporting our students to make greater progress than ever during their time at East Point.”