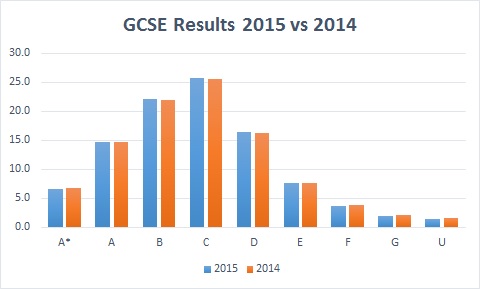 This year’s GCSE results are out and show that the GCSE A*-C rate has increased to 69% – a 0.2 percentage points increase on last year.

The proportion of grades A*-C in English and maths also increased this year.

It is the first year in which students who previously have not achieved a grade C in either subjects, but had continued onto post-16 study, were required to resit their exams.

By contrast, the pass rate for 16 year olds leapt from 66 per cent to 72.6. However this doesn’t fairly compare numbers due to changes in the way modules are taken. JCQ state that a fairer comparison is the ‘full year’ comparison. Taking this number, 16 year olds still saw an increase in English – but the change was only 2.5 per cent.

THE NOT SO GOOD NEWS:

Unlike its core counterparts, science saw a decrease in the overall pass rate down 2.4 percentage points to 56.7 per cent.

A JCQ statement said that this shift in entry patterns and the ‘first entry counts’ policy had “probably saw some lower ability 15 year olds in 2014 defer entry in Science to 2015” and affected outcomes.

The decline in entries to single science subjects also continued, albeit at a less dramatic pace than in previous years. Biology declined 1.9 per cent, chemistry 3.3 per cent and physics 2.56 per cent.

All single sciences saw an increase in their pass rate.

Despite the government’s focus on languages in the English Baccalaureate, entries dropped across all subjects. French down 6.2 per cent, German 9.8 per cent and Spanish 2.4 per cent.

Schools Week is analysing data for all subjects and will publish this morning. Check back for further analysis.