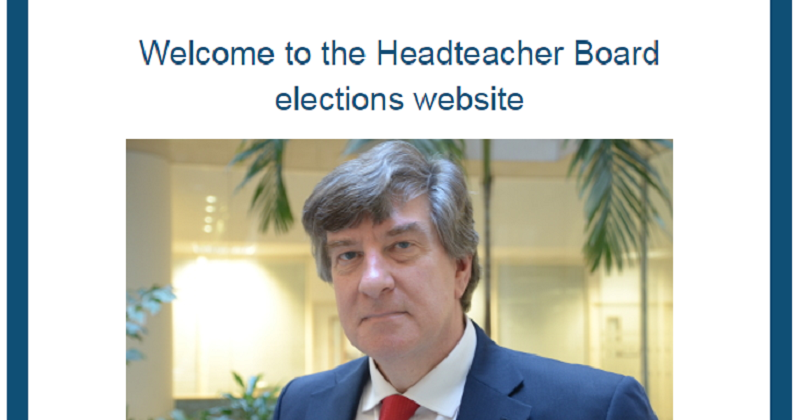 The Department for Education has given top academy headteachers two weeks to nominate themselves as candidates if they wish to advise RSCs on school takeovers, according to a new election website.

The results of the election will come out “before the Autumn half-term,” says the site, counteracting rumours that the new board members might not be in place until after Christmas.

The election is hosted by electoral services provider UK Engage, which has a dedicated webpage for the election. No information about the elections appears to be available on the Department for Education’s site.

The election launch comes after members of the headteacher boards voiced concerns anonymously to Schools Week that multi-academy trusts were lobbying to get multiple trust members on the boards in May.

They also expressed worries that a swathe of experience could be lost if old members were not re-elected when their terms end in September. The first headteacher boards were in 2014, with terms lasting three years.

Under election rules, published on the new website today, a candidate can stand in more than one headteacher board election, but can only win membership onto one board.

However heads from the same trust can be elected on to different headteacher boards, only if the trust operates across more than one region.

Two other posts on the boards are reserved for people “appointed” by the RSC, and two more for those “co-opted” by the board to join them. They might have education or “other expertise” knowledge, such as in business or accountancy.

Here is the link to all the information on HTB elections. Window open until July 21 https://t.co/hAbsVDxZkF

In a welcome message on the new website, Carter said being a member of the headteacher board was “one of the most important and dynamic school-system leader roles on offer.”

Four members will be elected to advise each of the eight regional schools’ commissioners, helping them decide on opening new free schools, converting schools to academies, choosing sponsors for academies, and intervening in “under-performance”.

Only headteacher or executive headteachers of academies, free schools, university technical colleges or studio schools in the  region are allowed to vote. Local authority school headteachers may not vote.

According to the new website’s eligibility criteria, candidates must be leading academies rated outstanding in every category, or good with outstanding leadership, at the time of election.

They could also be a retired headteacher who fell into either of those brackets on leaving their school, or a senior executive leader at academy trust, even if they are no longer practising headteachers.

Previously this has led to criticism that too many chief executive officers now sit on the headteacher boards. Indeed, sources told Schools Week the name “headteacher board” might change, which does not seem to have happened.

Potential candidates have until 21 July to put themselves forward. Each candidate will be entitled to have an election address and biography of no more than 200 words published on the election website.

Academy headteachers will be able to vote in a month from now on 8 September, and voting will close on 21 September.

Instructions of how to vote will be sent before polls open to all qualifying electorate using the email registered for the school’s URN on Edubase.

Sources have previously warned that this will be a tight turnaround – as current elected members are only contracted until the end of September.

Correction: This story was amended on July 10th to make clear that no more than one headteacher or school leader per multi-academy trust can be elected onto any one headteacher board.