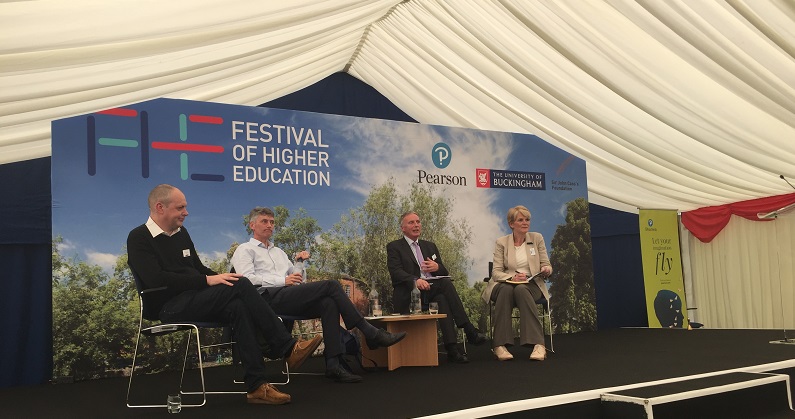 School pupils are being told by universities that they don’t need to finish their A-levels, it has been claimed.

Pupils are “increasingly the subject of persuasive strategies” from universities, according to Bill Watkin, the chief executive of the Sixth-Form Colleges Association. Some are even encouraging pupils to quit school early and take up foundation degrees.

Speaking at the Festival of Higher Education at the University of Buckingham, Watkin warned of the “unhelpful” impact on schools of unconditional offers, which promise university places to pupils regardless of their A-level results.

He chastised universities for their recruitment tactics, which include lowering entry requirements and offering funded places to attract more students.

In some cases, universities have even written to 17-year-olds asking them to ditch year 13 in favour of foundation degrees, which are combined academic and vocational qualifications equivalent to two thirds of a bachelor’s degree.

“It has been reported that foundation degrees are being offered as a way of locking prospective students into a full degree afterwards, and even advising a student at the end of year 12 to take a foundation degree rather than completing A-levels at all,” Watkin told Schools Week.

“Some universities are now setting a lower bar in terms of entry-level criteria – so perhaps BBB instead of AAB – and even offering to cover a student’s first year tuition costs.”

In April, Schools Week revealed that the new universities regulator had made an investigation into the impact of unconditional offers one of its first orders of business.

The Office for Students has vowed to “take action” if it finds that unconditional officers adversely affect schools.

Unconditional offers issued to 18-year-olds in England have increased by more than 17 times in the last four years.

Watkin said the “significant” rise in unconditional offers means pupils are “less likely to feel a sense of urgency and determination to work flat out to get the very best grades in the final year of sixth-form study”.

For example, he warned delegates that some pupils with such offers have been opting out of school assignments.

“You’ve got students in classrooms in the sixth form now who are saying ‘I don’t think I’m going to do the essay this week, I’m sitting on an unconditional offer’. I understand why universities are doing this, but I would say consider the implication on the mindset of 16-and 17-year-olds,” he warned.

A spokesperson for Universities UK, the body representing higher education institutions in Britain, said unconditional offers “account for a very small proportion of all offers made by universities”.

“They tend to go to mature applicants who already have qualifications, and to applicants with extensive practical and relevant experience for courses such as fine art or journalism,” they added.

“They can also be awarded where evidence suggests applicants are clearly on track to exceed the required entry grades, and to applicants from disadvantaged backgrounds with the potential to do well at university with additional support.”