The education watchdog Ofsted has published its corporate annual report and accounts, which give an update on the inspectorate’s performance as an organisation.

The document is not to be confused with its official annual report, which is a report to parliament on its inspection activity, and is normally released in the winter.

Ofsted suspended routine inspections in March, and estimates it has lost about 6 per cent of available inspection days.

As a result, the watchdog said it would be “extremely unlikely that we will complete some inspections that we were required to make by August 31 2020”.

These include 166 inspections that would have been legally-required, had the legal duty to make them not been suspended via the Coronavirus act.

Ofsted said it was also unlikely to carry out 34 expected area SEND inspections by the March 2021 deadline. 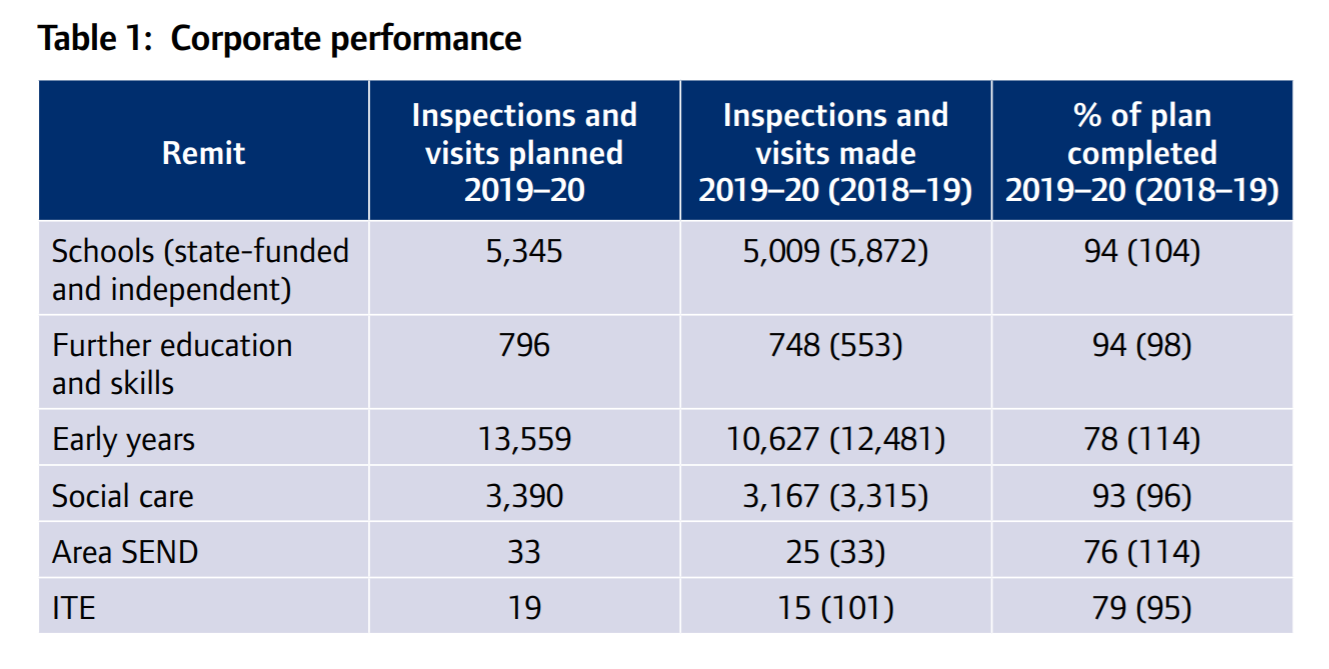 2. But Spielman is ‘proud’ of Ofsted’s response

In her foreword to the report, chief inspector Amanda Spielman said she was “proud of Ofsted’s response to the pandemic”.

“We recognised early that some of our regular work would need to pause, but that other areas of government, along with local authorities and frontline services, would come under great pressure.

“We acted quickly to deploy many hundreds of staff to support the national response, in central and local government and elsewhere, while making sure that our critical regulatory work continued. Our staff are showing great flexibility and real dedication to public service.”

The report states that Ofsted has now conducted 3,200 school inspections under its new education inspection framework, which was introduced last September.

Data from post-inspection surveys of settings inspected under the EIF found state schools were less likely to be satisfied with the process.

Eight-eight per cent of state-funded schools said they were satisfied with the way the inspections were carried out, compared to 94 per cent of independent schools and 93 per cent of FE providers.

Eighty-eight per cent of state schools also agreed that the feedback given on the quality of education would help them improve, compared to 91 per cent of independent schools and 96 per cent of FE providers. 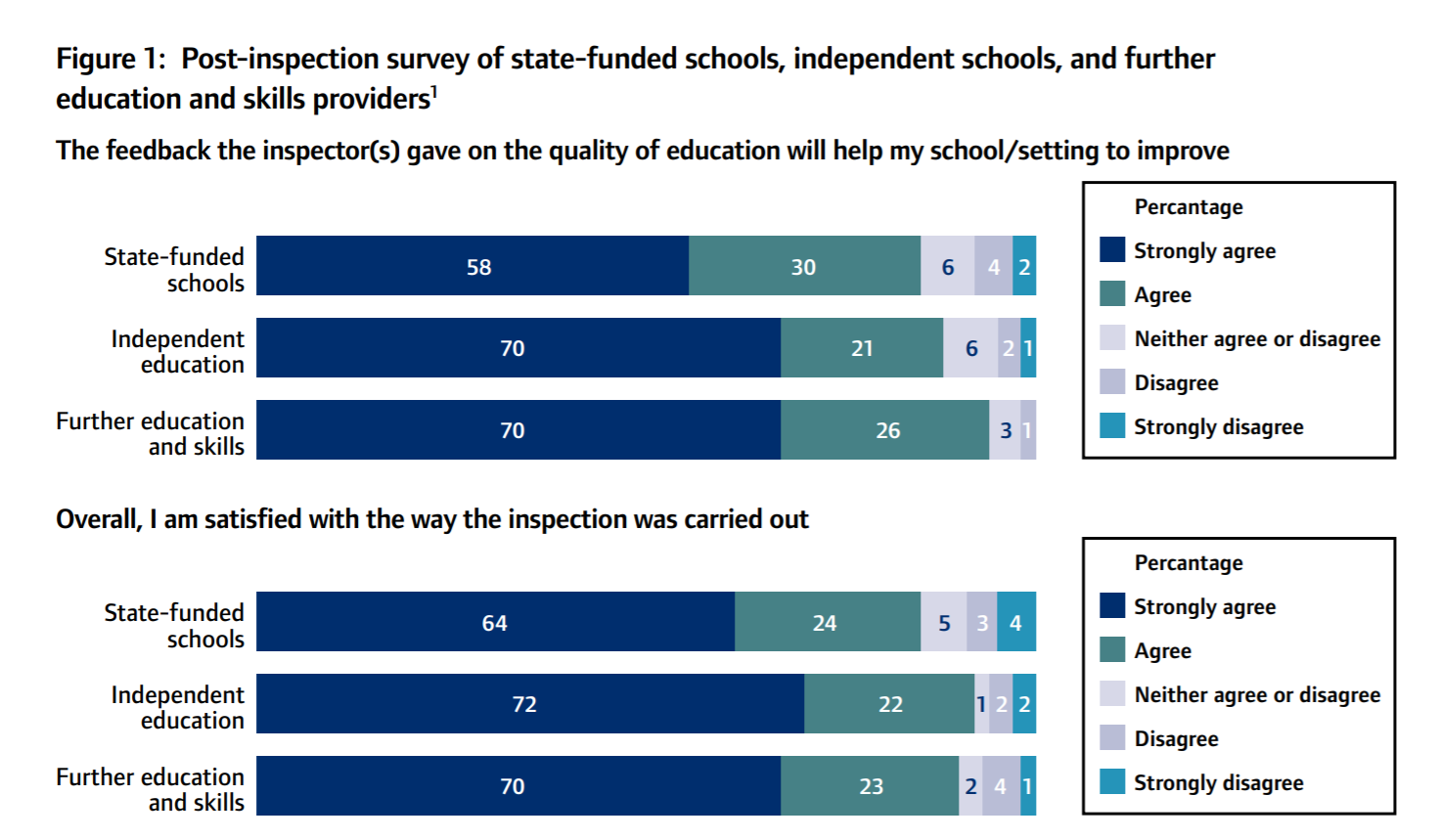 In her foreword, Spielman said the EIF had been “a real success, clearly reflected in the balance of post-inspection survey responses from many hundreds of schools and colleges that have experienced the new model”.

“We worked with the education sector to make sure that the changes were clearly understood, trained our own inspectors thoroughly, and have acted on feedback.”

Ofsted will evaluate how the EIF has been implemented and explore experiences of it so far, and will publish its research in the autumn.

Ofsted said parents “continue to value” its work, pointing to the outcome of its 2020 parent attitude survey.

Almost 9 in 10 parents know the Ofsted rating for the setting attended by their child.

Ofsted set up an emergency response team in February in response to the growing coronavirus crisis, and opened an operations centre in March to “gather intelligence, address issues and coordinate communications”.

The inspectorate also deployed “significant numbers of staff to support local authorities, other government departments and the frontline”.

“We anticipated early in the crisis that we had the capacity and skills to support the national effort. We immediately gathered information about staff’s skills, locations and availability and established a deployment panel to match staff to roles.”

“During the crisis, over 600 Ofsted staff have been deployed to other organisations.”

In 2019–20, the proportion of inspections complained-about has increased rose by 0.7 percentage points.

Ofsted said this was “not unexpected following the implementation of a new inspection framework for many of those we inspect”.

“The proportion of providers that complain is still low: 2.5 per cent of all inspections and other activities in the period covered.”

Around 19 per cent of complaints had an aspect upheld or partially upheld, a reduction from 22 per cent last year. Following complaint investigations, Ofsted changed the overall effectiveness judgement for 12 inspections and deemed 13 inspections to be incomplete.

According to the report, only 13 complaints about inspections in 2018-19 were referred to the Independent Complaints Adjudication Service, a “record low number”.

The adjudicator also reported that it was minded to make recommendations for improvement “in only five cases”.

“These results bear testament not only to the quality of Ofsted’s front line work but also to diligence and thoroughness of its complaints handling team, who continue to work very cooperatively with ICASO,” they said.

A number of Ofsted senior staff received bonuses in the 2019-20 year.

Sean Harford, the watchdog’s national director of education, received a bonus of between £0 and £5,000, as did HR director Karen Shepperton.

The report also states that senior managers have agreed to waive any bonus payment “that might otherwise have been made in the current financial year”.

9. Spending on consultants and agency staff up

Ofsted spent more on consultants and temporary and agency staff in 2019-20, the report shows.

Spending on temporary and agency staff also rose to £4.3 million, up from £3.7 million the previous year.