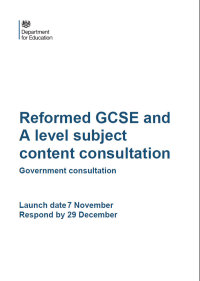 Pupils will need to study two religions under new criteria for GCSE religious studies, but non-religious worldviews will not be included, a government consultation document has revealed.

Launched today by the Department for Education (DfE) the consultation outlines the new subject criteria for the GCSE which will now require pupils to systematically study two religions. Previously students could pass the qualification by studying only one religion.

Ministers have, however, decided against the inclusion of non-religious worldview studies, such as humanism.

Faith and humanists groups have hit out at the move saying the new criteria does not adequately prepare pupils.

British Humanist Association Chief Executive, Andrew Copson said: “We are deeply disappointed to see no annex on humanism in the criteria published by the DfE.

“Inclusion of an optional module on humanism would have been just that – optional – and schools could have decided to cover it or not. But under these criteria they won’t even have that choice. Forty years of progress in RE, including last year’s RE curriculum framework, make it clear that the systematic study of humanism contributes to making the subject both rigorous and relevant.

“What sense does it make for pupils following that new framework and studying humanism, to then be denied the chance to continue that study in their GCSEs, alongside the study of religions?”

Director of 3FF, an interfaith organization working with faiths and beliefs, Stephen Shashoua said: “The current suggestions don’t go far enough. Young people need an opportunity to learn about non-religious worldviews as well as religious, and develop an understanding of actual lived diversity in the UK, not just abstract facts.”

Dr Joyce Miller, Chair of the Religious Education Council (REC), said: “The REC Board has agreed unanimously that the optional systematic study of a non-religious worldview should be introduced at GCSE level.

“We want to promote a rigorous and inclusive study of religions and beliefs that is relevant and challenging for young people of all faiths and none.”

The Church of England have on the other hand welcomed the study of two religions.

Rev Nigel Genders, Church of England’s Chief Education Officer said: “We welcome the work being carried out to ensure religious studies GCSE and A level qualifications enable students to study this vitally important subject with the rigour and depth they deserve.

“Studying two religions with a further detailed text based study for one of the religions at GCSE will promote depth and breadth and equip students to be religiously literate in today’s world.”

The consultation will end on 29 December 2014 and the new specification will be taught for the first time in September 2016.