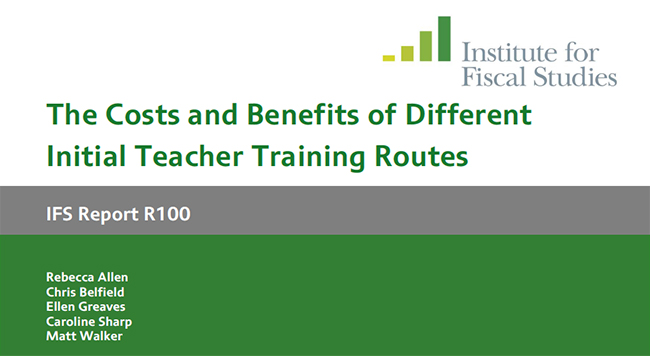 Schools think they benefit more overall from school-based teacher training than university-based routes, a new survey by the Institute for Fiscal Studies (IFS) has found.

The IFS survey into the net cost of the different training courses was based on responses from 291 primary schools and 196 secondary schools. Click here to download the report.

A further 30 per cent of trainees at primary and three per cent at secondary were working towards a Bachelor of Education qualification, it added.

But the government has encouraged a shift away from the higher education route, which IFS said had been reflected through new school-based routes being taken by 20 per cent of trainee teachers in the last academic year.

And their report stated: “Our survey showed that schools are more likely to state that benefits are higher than costs for school-based routes than for university-based routes.

“This gives some support to the government’s emphasis on the benefits of school-based training, although there was significant variation for the School Direct salaried route, suggesting that schools’ experiences are not universally positive.”

The report stated that schools faced costs, such as staff time required to supervise and support trainees for all routes, salary and other payroll costs, for School Direct salaried and Teach First routes.

But it added they may also have benefitted from having trainees around — for example through contributions made to new teaching ideas.

Katharine Vincent, programme leader for the secondary PGCE at the Institute for Education, a university which works in partnership with over 500 schools and colleges across London and the south east of England,  told Schools Week: “Around the world, the contribution of universities to professional formation of teachers is associated with high quality. We therefore believe that the best approach to initial teacher education and training is one which values the strength of existing partnerships between schools and universities and seeks to build on these.”

The IFS survey also compared the cost of the different training routes to the government.

The report stated: “The cost of providing student finance makes non-salaried routes more expensive than salaried routes when students are eligible for scholarships or bursaries.”

It added: “Student finance is available for the cost of tuition fees and living costs for all non-salaried routes and eligibility for maintenance grants is not affected by access to bursaries and scholarships.

“The average cost to government of providing this student finance is large (between £13,000 and £18,000 per trainee for postgraduate ITT and between £10,000 and £27,000 for undergraduate ITT), as a teacher with typical career progression would not pay back their loan before it is written off.

“In fact, a teacher with typical career progression would not even begin to pay off a postgraduate ITT loan, due to large outstanding undergraduate loans.”

The report noted that for most training routes, the net benefit to schools was small in comparison with the costs for central government.

But it stated: “The notable exception to this is Teach First, where the largest net benefit to schools is reported.”

Teach First runs a two-year course for “outstanding” graduates who can earn a salary while training to be a teacher in a school in a low-income community.

Sam Freedman, Teach First’s director of research, evolution and impact, said: “It is great to see that schools rate our programme as having the highest benefit relative to costs, making Teach First the best value for money route for high priority subjects, such as science and maths.”

The report also noted that the potential negative impact on pupils’ progress was a significant barrier to participation in training for schools.

Concern about this was raised by almost one-half of primary school head teachers and around one-third of secondary school subject leaders.

But the report concluded that pupil attainment was “largely unaffected” by the presence of trainee teachers.

A Department for Education spokesperson said: “Teaching has never been more attractive, and thanks to our plan for education we now have more teachers in England’s classrooms than ever before – up 9,000 on last year.

“This report by IFS shows that schools recognise the benefits of school-based teacher training, supporting our move to give them a greater responsibility for training teachers.