Pupils known to social services lag far behind their less vulnerable peers at GCSE, even if they are no longer classed as being “in need”, the Department for Education has warned.

New research found pupils who had been classed as “in need” at some point between 2011 and 2017 scored an average attainment 8 score of 29 last year, 19 points below the average score of 48 scored by their peers.

And only 40 per cent of children in need – pupils who are looked-after, supported by social services, on child protection plans or young carers –  reached the expected standard at in reading, writing and maths at key stage 2, compared with 64 per cent of their peers.

It is the first time the government has analysed the outcomes of children in need over such a long period of time. Previous analysis has focused on those who were in the category more recently.

According to the government, the data shows the “lasting negative impact” of being in need, because it includes analysis of pupils “beyond the point of being in need”, children who were no longer in that category by the time they took their SATs or GCSEs. 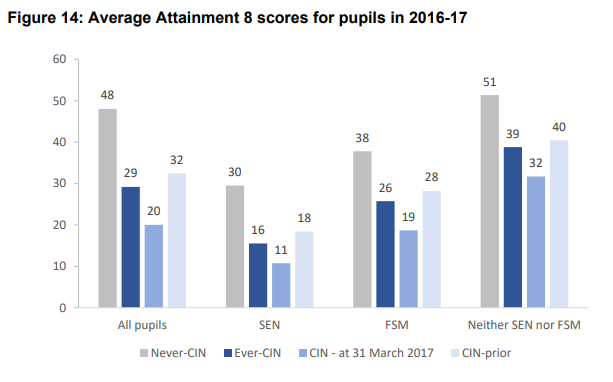 It follows new guidance from the DfE which advises teachers on how to speak to vulnerable pupils, particularly those who might be experiencing domestic violence.

A previous study in March this year found children in need achieved an average attainment 8 score of 23 in 2015-16, compared with 50 for other pupils.

The most recent research also shows that pupils who have been in contact with social services are more likely to live in poverty and have additional needs.

Of the 763,000 pupils who were in need at some point between 2011 and 2017, 35 per cent had special educational needs, compared with just 13 per cent of pupils who were never in touch with social services over that period.

Meanwhile, 42 per cent of children in need were eligible for free school meals, compared with 11 per cent never in touch with social services.

And 17 per cent had both an identified special educational need and were eligible for free school meals – an overlap which occurred in just 3 per cent of children who had no dealings with social services.

Overall, one in 10 pupils in state schools have been in contact with a social worker at some point in the previous six years.

The government’s new advice, which does not have funding attached to it, aims to help schools “adjust how they manage vulnerable children’s behaviour and adapt how they speak to the child”.