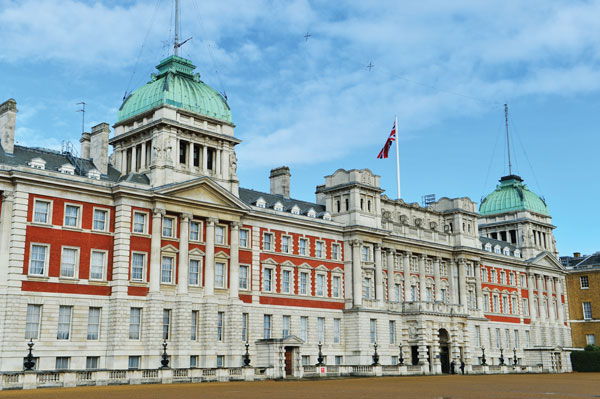 – £45-50m tendered for upgrade of Old Admiralty Building in Whitehall to house up to 1,600 staff

A £50 million Department for Education (DfE) plan for its new headquarters includes fully refurbishing a gym and creating space for the government art collection.

The DfE announced in March that it is to leave the rented Sanctuary Buildings in Victoria and move its 1,600 staff to the Grade II listed Old Admiralty Building (pictured) (OAB) in Whitehall, by summer 2017.

A tender for the refurbishment was put out last month offering the contract at a price tag of up to £50 million, excluding VAT. It expects work, which will enable more staff to work in the building, to start next November.

In the detailed plans seen by Schools Week, prospective bidders are asked to provide details of their suitability to carry out work such as “full refurbishment of the gym” and “creation of space for the government art collection”.

When asked to defend the decision this week, the DfE said “no final decision” had been made on whether there would be a gym in the building and it was still in discussions about the artwork. The current department offices include a gym.

The Whitehall site at present houses the Foreign and Commonwealth Office (FCO), which will move to King Charles Street next year. The DfE move is part of cost-cutting measures that will save £19 million a year.

The government has hired project management firm Mace to oversee the refurbishment.

The last major refurbishment of the OAB cost the taxpayer £63 million before the FCO move in 2001, while the government spent £14.2 million updating Sanctuary Buildings between 2006 and 2009.

On Monday education secretary Nicky Morgan was asked in a BBC Newsnight interview about the number of DfE civil servants and said: “At the end of the day, if I had to make a choice about where to put resources, out in the frontline in schools, or in Whitehall, it would be in schools.”

When he was shown details of the tender, National Union of Teachers’ (NUT) deputy general secretary Kevin Courtney told Schools Week: “Nicky Morgan has said she believes that resources should be put into schools, not into Whitehall.

“At a time of supposed austerity it appears that there is money for £45 million refurbishment costs for DfE offices, £45 million for one free school sixth form in central London, and additional large sums of money to be spent on academy brokers.

“At a time of sweeping cuts to school budgets and sixth-form funding, never mind the huge reduction in the school building programme, this shows a surprising lack of judgment.”

The DfE said the refurbishment costs would be funded mainly by the Cabinet Office through the sale of other government property. The size of the DfE contribution is unknown.

A department spokesperson said: “Our move to the OAB is expected to save the taxpayer £19 million a year – and will free up money that was being spent on rent so it can be reinvested back into our budget.

“The cost of the move is being strictly controlled. For example, we will be re-using furniture and sharing catering facilities with other departments.

“Since 2010, we have reduced the annual cost of buildings by £17 million, with another £2.5 million being saved in 2014 through vacating buildings in Guildford, Cambridge and London.”

When Nicky Morgan said spare money should be spent in schools, she was right. Given we have reported on schools with malfunctioning generators and temporary premises there are plenty of places that need it.

Though the government may save money with the move, it still matters what you spend that saving on. And it is right questions are raised about whether upgrading a gym for DfE staff or installing the government art collection is a good use of money.

There is a reasonable argument to say it is worth spending the money. Staff perks attract a strong workforce. Art collections hold value if looked after.

Yet the DfE didn’t make these arguments. Instead, despite it being in the tender specification, they said “no final decision” had been made on the gym or location for the art.

So where does this leave the contractors in responding to the specification?

And, the question that has to be asked, is that if you aren’t prepared to defend a spending decision publicly then should it be authorised? That’s one for Morgan and Whitehall to ponder.