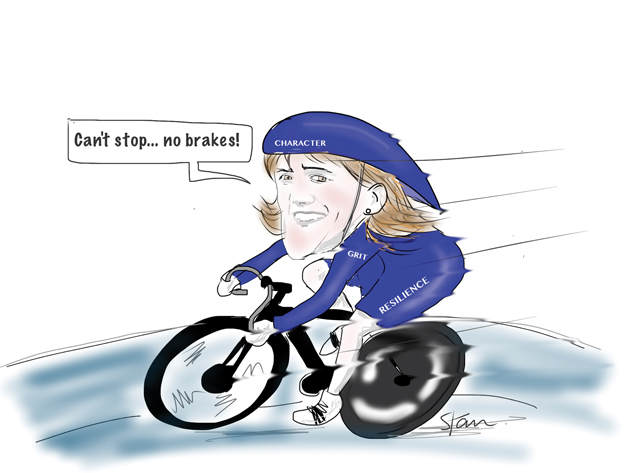 In a speech light on policy but with a change in rhetoric Nicky Morgan has pledged to reduce teacher workloads and help to build “character, resilience and grit” in pupils.

With an emotional Michael Gove in the second row (pictured right), the new Education Secretary told the audience at her Conservative Party conference speech that success in reform had come because the party “was not easily held back” by critics.

She also repeated what she had labelled in a NASUWT fringe event earlier in the conference as her “fifth priority” for education, which was to create “well-rounded” individuals.

She said: “Some said we were moving too fast, told us to pause, said “your plan for education is too much – it can’t be done”.

“But we were not easily held back. We said “yes it can”. And just look what we have achieved. Standards: back; discipline restored; expectations high.

“An old culture of ‘can’t’ replaced with a new culture of ‘can’, and more children being taught in good or outstanding schools than ever before. That’s the story of this government.

“It’s a story of great reform, yes, but of great achievement too. And I want to take a moment to say thank you to everyone who has played their part.”

Ms Morgan pledged to reduce the burden on teachers, but stopped short of announcing any policy to do so, instead promising to speak to teachers and unions.

She said: “I don’t want my child to be taught by someone too tired, too stressed and too anxious to do the job well. I don’t want any child to have to settle for that.

“The reasons that teachers in England work longer hours than their counterparts elsewhere in the world are many and varied. I wish I could announce some great initiative today that would solve this problem at a stroke. I can’t do that, but I will work with the profession over the coming months to find solutions, through the programme of talks with the unions, yes, but also through a new process of engagement with teachers across the country.” Ms Morgan also said the government needed to show all schools, regardless of type, that they were equally valued, and announced the approval of 35 new free schools, adding: “We believe in free schools not because of ideology, but because they work.”