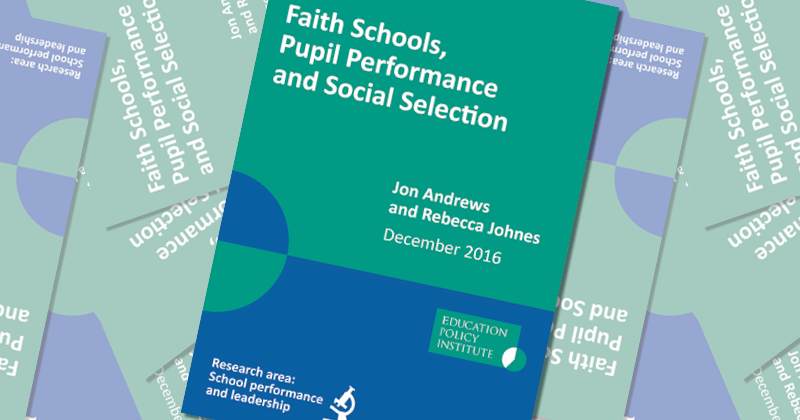 A plan to boost the number of faith school places by changing prohibitive admissions rules on new schools is “unlikely to be effective” in increasing social mobility, warns the Education Policy Institute (EPI).

The think tank has found that pupils in faith schools seem to do “little or no better than in non-faith schools” once attainment and progress figures are adjusted for disadvantage.

The research, conducted in the wake of an announcement that the government wants to lift the 50 per cent faith admissions cap on free schools in over-subscribed areas, found that small gains in attainment could come “at the price of increased social segregation, with a risk of lower social mobility”.

But Catholic education officials have argued that the research “bears no resemblance” to their schools.

The report, Faith Schools, Pupil Performance and Social Selection (pictured), concludes that while raw attainment and progress measures for faith schools suggested their pupils did better, the gains “largely disappear after adjusting for pupil characteristics”.

It added that pupils in primary faith schools “seem to do little or no better”. Pupils in secondary schools had results “just one-seventh of a grade higher in each of eight GCSE subjects”.

“However, given that the average faith school admits fewer pupils from poor backgrounds than the average non-faith school, there is a risk that such small gains would come at the price of increased social segregation, with a risk of lower social mobility.”

A spokesperson for the Catholic Education Service said more Catholic schools would “answer the demand of tens of thousands of parents of all social backgrounds who wish for their child to have a Catholic education.

According to the Church of England, 15 per cent of pupils at its secondary schools are eligible for free school meals.

The church also says that the 2013 school census shows that 25 per cent of pupils attending C of E secondary schools came from black or minority ethnic backgrounds, one percentage point short of the national average.

A spokesperson for the C of E said: “We have no plans to change our approach  on faith based admissions criteria following the government’s proposals to relax the 50 per cent rule.