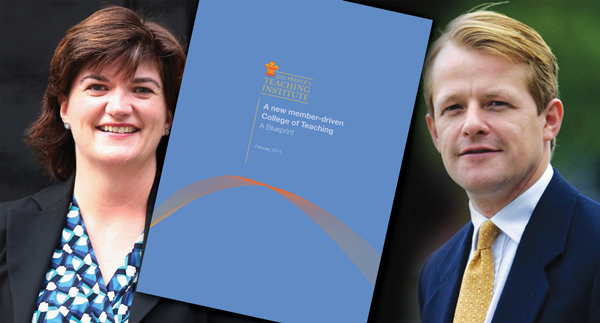 A proposed college of teaching has been backed by the government in an announcement by ministers Nicky Morgan and David Laws this week.

Last month Schools Week reported that it would take up to three years for the college to get up to capacity after its initial launch.

A new website, claimyourcollege.org, has now been created to give teachers the chance to discuss how the idea should be implemented.

In this week’s Guardian Education, Ms Morgan and Mr Laws wrote: “This new body will allow teachers, like other professionals, to set their own high standards for their members; to take a lead in improving the profession’s skills and abilities, and to champion higher standards for children.

“It is crucial that this body should be created and led by teachers, but government can help things along, and we will do all we can to ensure a new college of teaching can open its doors within the next couple of years.”

In May 2012, the education select committee recognised that an independent professional body for teachers was an important step for the profession.

Since September of that year, the Prince’s Teaching Institute (PTI) has been developing the college, including a “blueprint” put forward in February this year.

In that document membership subscription fees were mooted at between £70 and £130 a year, and annual certification charges at between £170 and £190.

It is expected the college will also be funded from a range of sources, including foundation trusts and businesses.

More than 1,200 teachers and headteachers have responded to an online survey about the proposal, which is supported by the teaching unions, including the NASUWT and ATL.

Ms Morgan and Mr Laws also announced a fund to “provide more high-quality, evidence-based professional development”, to be led by the 600 already-established teaching schools created in 2011 with the aim of a “self-improving” school system.

Teaching schools have six “strands” to their remit, known as the Big Six. They are initial teacher training and continuous professional development; school-to-school support; specialist leaders of education; succession planning and talent management; and research and development.

Speaking about the announcement, David Weston, chief executive of the Teacher Development Trust, said: “This announcement recognises the importance of teacher development for improving the lives of our young people and retaining and growing our best professionals. We believe that the government could go even further to fund the development of a proper career path for teachers, which builds in professional development throughout teachers’ careers and recognises and accredits quality and impact.

“We particularly support the government’s focus on high-quality CPD as there is currently significant variation in the relevance and effectiveness of CPD in our schools, and we welcome the focus on ensuring that the profession takes more control over its future development.”

Research is continuing into the effectiveness of teaching schools. An interim report, published by the Department for Education in April, looked at 18 teaching school alliances in the summer of 2013.

The report noted issues of accountability, governance and financial disparities across the schools, stating: “One alliance had a clear grip on finances and another was struggling to set up a separate trading account and construct a budget profile that could be monitored on a monthly basis.”

The report also noted some excellent work contributing to positive outcomes and that in “almost all” of the 18 case studies there was good progress towards delivery of the Big Six goals.

A final report will be published when the two-year study ends next year.