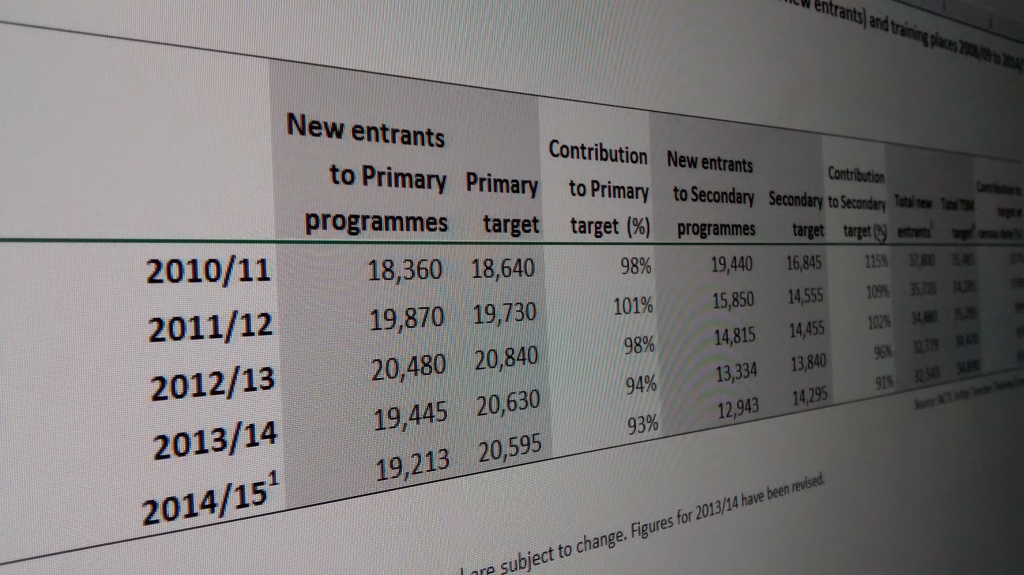 Concerns have been raised about efforts to train sufficient numbers of teachers after figures were released showing that the number of new trainees has dropped for a third consecutive year.

In total, 32,779 people started Initial Teacher Training (ITT) courses in September, according to a first release of training census figures, down on 32,543 last year. That represented a widening of the margin by which recruitment targets were missed, from 95 per cent to 93 per cent.

The figures were seized on by Labour, who said the government’s failure to hit recruitment targets was “storing up trouble” for schools.

A breakdown of the figures showed that the number of new primary trainees fell slightly from 19,445 last year, to 19,213 this September, at a time when there is a forecast growth in the number of primary pupils.

By 2018, the government estimates there will be 4.6m pupils in state primary schools, a 7 per cent increase compared to 2014.

The figures also mean that a government target for recruiting trainee primary teachers was not met for a third year running, with only 93 per cent of this year’s target reached.

Professor John Howson, a senior research fellow at the University of Oxford, flagged this as an important area for government attention, given the predicted rise in primary places.

Professor Howson also said that School Direct, the government’s school-led training programme, had “got to play their part” in ensuring there were enough trainees, after the figures showed that only 61 per cent of places allocated to School Direct had been filled.

School-led training programme School Direct started in the 2012/13 academic year, and offers two training routes: a salaried route and one in which trainees pay a fee.
For the programme’s fee-paying route, only 57 per cent of places allocated for this year have been taken up.

Professor Howson said: “The School Direct fee route only recruited 57 per cent of the places [allocated to it] … that is a frighteningly low figure. The government has got to explore what the cause of that is, and what can be done to improve it.”

Commenting on the ITT figures, Tristram Hunt, the Shadow Education Secretary, said: “By failing to recruit enough trainee teachers year-on-year, David Cameron is storing up trouble for our schools.

“A shortage in qualified teachers and soaring class sizes is damaging standards in our schools and will harm the quality of education that our children receive. David Cameron urgently needs to get a grip over his education policies and put an end to his Government’s crisis in teacher supply.”

A Department for Education spokesperson said: “We always allocate more places than are needed to ensure a high quality supply of teachers across England’s classrooms, we never expect to fill to 100% of allocated places and we are confident we will continue to meet future demand.

“Teaching continues to be a hugely popular career with more teachers in England’s classrooms than ever before with record levels of top graduates entering the profession – one in six now holds a first class degree.”

Figures covered by the release did not include Teach First, nor the government’s Troops to Teachers programme.

The number of places allocated to different training routes is higher than targets for each route, to account for factors such as non-completion of courses.