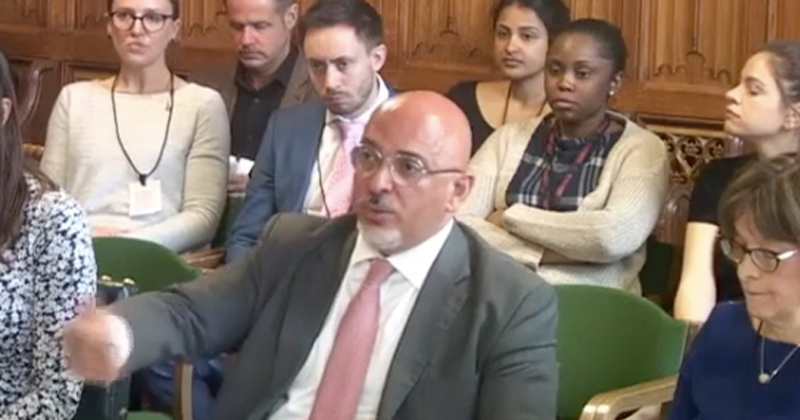 The children’s minister has admitted the Opportunity Area programme could do with a “more ambitious outlook”, after refusing to answer point-blank whether it will get funding to continue next year.

Nadhim Zahawi came under pressure during an education select committee this morning to brush off rumours the £74 million programme in 12 social mobility “cold spots” around the country will be discontinued three years after launching.

MPs also queried whether the Department for Education had “micromanaged” the appearance of representatives of the Opportunity Area boards ahead of an evidence session two weeks ago.

It was the second session on the issue by the committee, which has previously heard the Opportunity Area boards are suffering from a lack of support from other governmental departments.

Robert Halfon, chair of the committee, asked Zahawi point-blank for a “yes or no” answer as to whether “there are any plans to abolish Opportunity Areas”, after committee member Lucy Allan also said she’d heard they might be.

Zahawi replied he would do his “utmost, strain every sinew, to convince Treasury to continue this programme”, which Halfon dismissed as “not an answer”.

The children’s minister then admitted he thought the programme “could do with a more ambitious outlook”, adding he had always wished the programme was longer than three years since it began in 2016.

He added there was a spending review coming up in autumn this year and he must “go and deliver the evidence”.

The pressure on the minister came after MPs questioned him and Hannah Streatfield, deputy director of the Opportunity Areas programme, about whether the DfE had too much hand in its local operations and had meddled ahead of the last evidence session.

Ben Bradley, MP for Mansfield, said board representatives had told MPs they were “told which programmes they can and can’t do and were told which organisations they had to work with”, adding the boards seem to be a “facade of accountability on a local level”.

It comes after analysis by the National Foundation for Education Research found opportunity area boards were “too led” by the government and local stakeholders needed more influence over deciding on the programmes.

But Zahawi insisted the leadership of boards was “fiercely independent” of the government, and said chairs of the boards were “accountable to their plans, rather than to the DfE”.

He revealed chairs “don’t get paid for the work they do” but “if we ask them to do additional work, there may be a small daily rate payment”.

However Bradley pressed on, insisting board members had said they’d been “briefed” by the DfE ahead of last week’s evidence.

Streatfield said “we didn’t brief everyone who attended as to what to say,” saying she was in attendance in a “supportive capacity” only and had helped “collaborate” on what they would talk about.

But Halfon said the witnesses for the session appeared to have been “primed and briefed” and accused the DfE of “micromanaging” what chairs could talk about.

The pair were also asked to defend why “pet projects” of the DfE such as youth programme the National Citizen Service seemed to be so prominent in Opportunity Area board plans. However Streatfield insisted boards were able to “flex” the NCS programme to their local area.

“It’s about making something already in existence better and more effective in that area,” she said.

MPs were also unimpressed when Streatfield revealed £500,000 had been taken out of the budget for the Opportunity Areas and given to the Careers Enterprise Service to develop careers advice specifically for the areas.

Halfon asked why extra money had been handed to the CEC on top of its “existing huge budget”.

Zahawi said the “additional half a million was for work identified by the Opportunity Areas above and beyond the CEC’s work”.