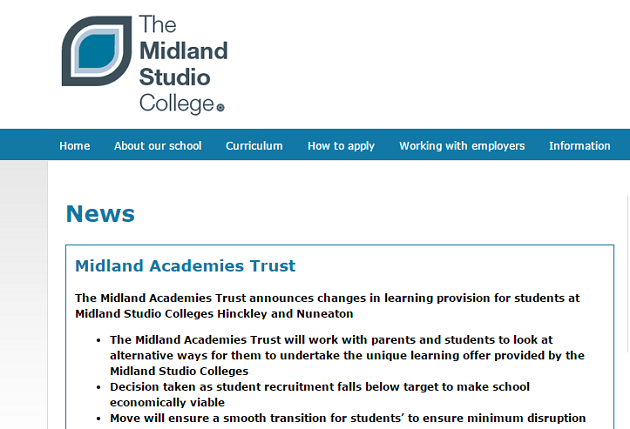 Two studio schools in the midlands will close next summer after their sponsor declared them “economically unviable” due to low pupil numbers.

The Midland Academies Trust has announced plans to close the Midland Studio Colleges in Hinckley and Nuneaton, and has begun the process of finding places at other institutions for their combined 157 pupils.

The trust, which admitted the schools were at around 25 per cent of their combined capacity, said student recruitment had fallen below a target to make the schools economically viable.

The Hinckley school, which opened in 2012, and the Nuneaton branch which followed a year later, can take 600 pupils between them, but Midland Academies Trust board chair Tim Render said “lower than forecast” pupil numbers meant the trust was unable to achieve a “high standard” of education.

Mr Render said the trust’s main priority was ensuring pupils were able to continue their studies with “the least disruption possible”.

He added: “Students will have the same support from personal coaches and employer partners as they do at present.

“With exams at the end of the academic year for some students, we are committed to providing a continuation in their studies and all the support and guidance that they require to approach this important time with the confidence to realise their best potential.”

The trust, which was set up by North Warwickshire and Hinckley College, has said it will work with parents and pupils to look at alternatives for their studies, with year 10 and 12 pupils able to join either George Eliot School or The William Bradford Academy from January 2016.

Year 11 and 13 pupils can stay at the studio schools until the end of the academic year.