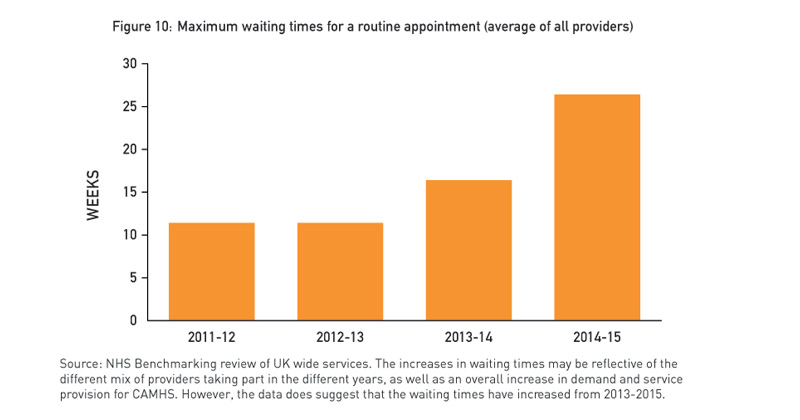 The government will train a member of staff in every secondary school to identify mental health problems in pupils, but schools won’t get additional funding to treat or refer children.

Theresa May has announced plans to deliver mental health “first aid” training to a staff member in every secondary school in England by 2020, but none of the money for the plan will go directly to schools.

The announcement has prompted a renewed focus on counselling in schools, with dedicated trained mental health professionals working alongside teachers seen as the best option.

In guidance issued last February, the Department for Education said there had been a “significant move away” from the idea of teachers adding counselling to their role, as “emerging good practice” treated counsellors as a separate profession.

Although the training announced by the prime minister on Monday is likely to boost the identification of pupils with mental health problems, an increase in referrals by schools could exacerbate existing serious backlogs in child and adolescent mental health services. The charity Young Minds has warned that services for young people have been “severely underfunded” in recent years, and NHS statistics show a sharp rise in the how long children wait between referrals and “first contact” with mental health services, from an average 7.3 days in February last year to 28 in June.

Older figures in research by CentreForum’s commission on children and young people’s mental health show the average maximum waiting time for a routine appointment was 26 days in 2014-15, more than double that of 2011-12.

CentreForum, now called the Education Policy Institute (EPI), also found a wide variation in waiting times between providers, with some children waiting up to 31 months for treatment.

Training would be “inadequate without work on existing resources”

“Even if there is more awareness of the issue, if there’s nowhere to refer to teachers are left holding an issue they’re not trained to deliver help for,” she said.

Training in schools will begin later this year ahead of a planned review of mental health services for young people.

But MPs and school leaders warn that a lack of additional resources in schools and local NHS services mean that it could fall short of what is needed to tackle what is acknowledged as a growing crisis.

Barbara Keeley, the shadow mental health minister, said the training would be “inadequate without work on existing resources”, and demanded the appointment of a qualified counsellor in every school.

Rachel Gooch, a national leader of governance and governor at two schools in Suffolk, said the proposals were “not even a sticking plaster. There seems to be no additional money for schools here and, more importantly, no money for the specialist services we need to be available to refer students to when they have a mental health problem.”

The training will be delivered by Mental Health First Aid UK to staff in a third of secondary schools this year. The remaining two-thirds will be provided with training in the following two years.

The Department for Education will also survey schools on how they currently deal with mental health issues, ministers said.

Ofsted to ‘back up’ plan

Ofsted will be involved in efforts to improve the support schools receive from health services, says the education secretary Justine Greening.

Writing in The Times, Greening said she wanted every school to get “the best support from their local mental health services” and that this effort would be “backed up” by Ofsted. The inspectorate already looks at mental health and well-being, with a Schools Week and Watchsted analysis last year showing it appeared in one third of inspection reports since a change to Ofsted’s framework in September 2015.

The analysis showed, however, that Ofsted tended only to pick out examples of good practice and rarely criticised poor provision.

Ofsted said at the time that there was no “specific requirement” for inspectors to report on mental health, but they did so when there was a “cause for concern, or if the school is particularly skilled in supporting pupils with these needs”.

Calls for a counsellor in every secondary school

The government will consider a mental health counsellor in every secondary school in England, says public health minister Nicola Blackwood.

Blackwood (pictured below) says the government was “looking at” whether more counsellors in schools was the best option as ministers sought to address fears about the rise in mental health problems among young people. Her comments follow a warning from Luciana Berger, a Labour MP and mental health campaigner, that tight budgets might force schools that already have counsellors to cut their working hours or scrap the posts.

“The prospect for the years ahead is to see some schools that fund counsellors five days a week going down to three, or three days down to one, and some having to scrap the provision altogether because they simply do not have the resources to make this very important service available in their schools,” she said.

Blackwood said ministers would consider the expansion of school counselling when it looked at the results of an ongoing trial of a “point of contact” approach.

NHS England is currently working with 255 schools in 22 areas that have appointed a specific staff member to liaise directly with local mental health services.

“The question is whether that [point of contact] system is more effective than having an individual counsellor in every school,” she said. “We are looking at that.”