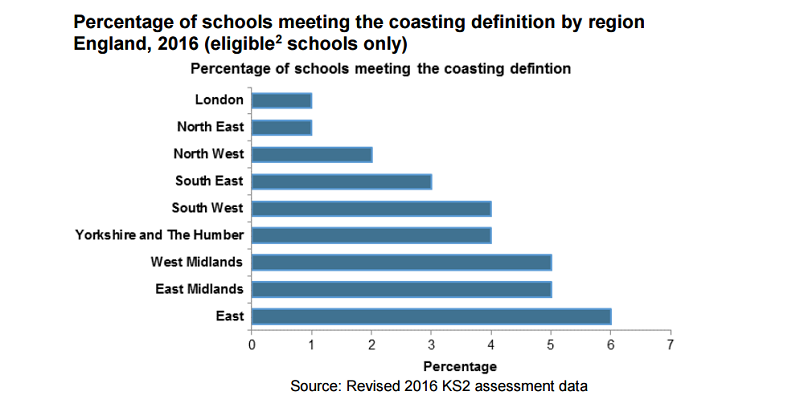 The east of England has the highest proportion of coasting primary schools, while London and the north east have the lowest, new government figures have revealed today.

Updated key stage 2 data released this morning shows that 83 of the 1,505 primary schools (6 per cent) in the eastern region are defined as ‘coasting’, making them eligible for intervention and potential forced academisation.

In contrast, just 1 per cent of schools in London and the north east are coasting, while the west and east midlands have the second highest proportion of coasting schools, with 5 per cent in each.

The release, an update to revised key stage 2 national assessment statistics, also shows that 477 primary schools have been identified as meeting the government’s definition of coasting in 2016.

According to the government, there is also an overlap between the number of schools falling below the floor standard and the number falling within the coasting definition.

Of 665 primary schools that were below the floor standard, 109 are also coasting.

The new regulations which officially define coasting schools came into force yesterday. A move by the last government to clamp down on schools considered to be coasting was passed by parliament in 2016 as part of the education and adoption act.

It was revealed last year that more than 800 secondary schools also face being labelled as coasting based on their progress 8 scores.

Former education secretary Nicky Morgan said that the coasting intervention would target schools failing to push every pupil to reach their potential, particularly those in “leafy areas with more advantages than schools in disadvantaged communities”.

Once a school is classed as coasting it will be assessed by the regional schools commissioner, who will decided whether the school has a “credible plan” to improve.

Schools deemed unable to improve will face being converted into academies, or rebrokered if the school is already an academy.