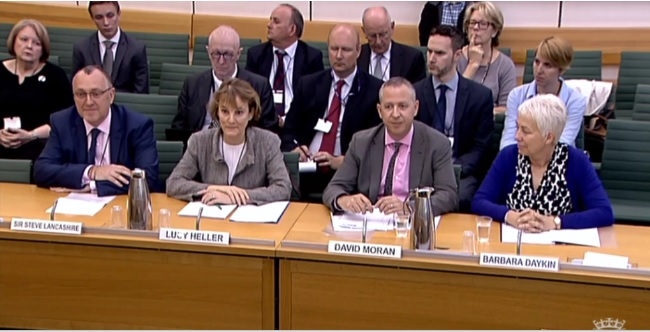 The parliamentary education committee heard today from eight witnesses about multi-academy trusts (MATs) and their role, size, governance and performance.

Each represented a different size of MAT, with Reach2 responsible for 53 primary schools, Ark for 34 schools, E-ACt has 23 academies, and Little Mead just with two primaries – “but seeking to grow”.

Both groups were quizzed about accountability in MATs, the speed at which MATs have grown, what the role of MATs was and how they should be governed.

Below are some of the main points that came out of this morning’s session.

1. MATs want to be inspected by Ofsted

This is a contentious issue that has split the sector for some time.

Nicky Morgan, education secretary, doesn’t want academy trusts themselves to be inspected but wants “batch inspections” of schools in MATs to continue.

Heller said: “In some senses MAT accountability is already pretty much covered by the inspection of individual schools but I am entirely in favour of MATs being held accountable and there being a MAT focus in Ofsted inspection.”

Daykin even said she would “love” Ofsted to come visit her trust.

2. The government are “schizophrenic” about the role of parents in academies

The MAT bosses said it was difficult to get some parents involved in school governance, especially in secondary schools, but all encouraged parental engagement, either through governance or parent councils.

Union boss Keates, however, said parent councils were “cosmetic” and that the way parental involvement had been discussed by the government was “schizophrenic”.

She said: “On the one hand, we’ve had the Educaiton and Adoption Act which has taken away parents’ right to be consulted about change of status of the school. There’s also [the policy] that parents on governing bodies is optional. But then we’ve got it being said that parents can trigger a change in sponsor or move a school to another MAT. How that would work in practice? I have no idea.”

Knights said there was a “huge amount of confusion” in the governance system and the government was using outdated phrases — for example, “governors” rather than “trustees” — which “did not help”. She advocated for parents on all boards, and for all members to challenge the trusts and it was “particularly worrying” having just “self-appointing” boards.

3. How many schools should a MAT have? It depends who you ask!

David Carter, national schools commissioner, wants MATs to have about 10-15 schools. But there was no clear agreement on this from witnesses.

Daykin, whose trust (Little Mead) has just two schools, said she wants her trust to grow in a “measured” way but it is a challenge with other, bigger academy trusts in the area.

She said: “At the moment we are seeking a school to join us but that is proving quite tricky because some of the bigger MATs are offering a more ‘glossy’ approach, when we are focused on school improvement.”

Lancashire said Reach2’s status as a large trust meant it had a “prerogative” to look after small, rural schools that “might be in danger of not finding a home”. He pointed to Suffolk and said Reach2 had “particularly targeted” small schools and could “support” them in an economically viable way.

Hobby said he thought the best size for a MAT was between 6-12 schools. But, both Richard Watts and Chris Keates said it was “too variable” to give a definitive answer.

Knights said size should be based on pupil numbers, not the number of schools.

4. MATs grew too quickly early on – and the DfE encouraged it

Much discussion was had about how fast MATs grew in the early years of the Coalition government. E-Act for example was forced by the government to give up 10 of its schools (more about that process below) as the number of schools it had was beyond its capacity.

Carmichael pushed witnesses on whether the need to grow “quickly” came from the government, or elsewhere, and all agreed the Department for Education “encouraged speedy growth”.

Moran said E-Act was now “unrecognisable” from when he started as its chief executive three years’ ago and it “made mistakes” before he joined. He added: “I think speed of growth, with a lack of strategy, a lack of school improvement vision, a lack of understanding where schools are, a lack of transparent governance structures, systems and processes, all combined to see the historic failure which was prevalent at E-Act three years’ ago.”

He said he was surprised the DfE allowed E-Act to grow in the way it did, but had “learnt lessons”, and was now more focused on “outcomes and capacity”.

Heller said speed of growth should always be considered in the context of capacity and resources of a trust – saying “it’s quite clear that some trusts grew too fast” and that Ark had one year where it struggled with capacity and the “central team almost expired”.

5. Rebrokering academies was an expensive and complicated experience

As mentioned above, E-Act rebrokered 10 of its schools after the government encouraged it do so after highlighting capacity concerns. Its schools were handed over to other MATs.

Moran said there had been a “a significant number of lessons learnt from that process” since they went through it two years’ ago.

“My reflection from the process last time was that the lawyers ended up with a lot of public money through engaging in this process. My understanding since then is the process has been streamlined.”

He said contracts then were very complicated but it is now a lot simpler though he suggested rebrokering should only occur at the end of academic years to prevent a culture of fear and worry in schools affected.

Heller said questions should be asked about why consistently underperforming trusts are still in control of schools. Schools Week has previously reported how the government has failed to rebroker 70 per cent of failing academies.

Keates, from NASUWT, said there was a problem in that a number of schools that “nobody wanted”.