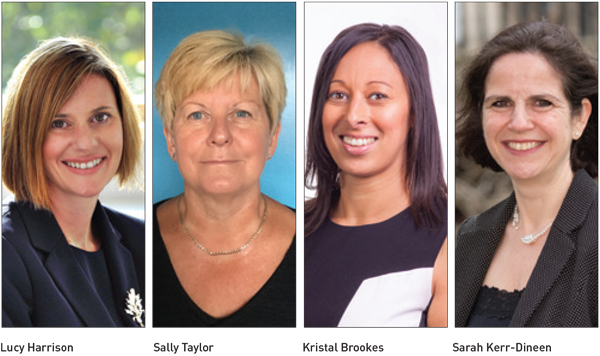 Lucy Harrison takes over from founding headteacher Mick Quigley as the leader of the Archer Academy, a free school in north London.

“I don’t want our pupils just learning subjects and knowledge, but learning how to learn and building their capacity to do that independently from the start of secondary school so that when they progress into key stage 4 and 5 they are able to work at a high level.”

She says the academy has “a thematic learning curriculum”; students follow the national curriculum but have a period a week studying themes across subjects.

It also has an enrichment curriculum. “We do this to build wider skills for the students and to expose some of their hidden talents.”

Ms Harrison studied history at the University of Birmingham, where she then completed a PGCE.

The Arthur Terry Learning Partnership (ATLP) has appointed Sally Taylor as its new interim chief executive until a permanent leader is in post.

Ms Taylor, who will take the helm until next July, says one of the first things she will look at is “working together on being really clear about the direction for the partnership for the future”.

Ms Taylor, a former director of education for Birmingham City Council, says she’d “reached that time” in her life when she did not want a permanent, full-time job but “then this amazing opportunity came along”.

She studied sociology at Goldsmiths College, University of London, and then completed an MA in education at the Open University.

Meanwhile, Kristal Brookes is the new deputy head at ATLP’s Mere Green primary school in Birmingham. She was assistant head at the city’s Smiths Wood Primary.

A teacher for eight years with a degree in primary education from Birmingham City University, she says a priority will be planning for the school’s conversion to two-form entry.

“When I got here the school had already set up life without levels and are already in the new curriculum, so I think we are a little step ahead of everyone else.”

Sarah Kerr-Dineen is the new head of the independent Oundle School in Peterborough, following the retirement of Charles Bush.

She says that it is too early in her tenure to determine what areas of the school need improving, but she will aim to build upon
the school’s aspiration, ambition and innovation “at the same time as the healthy development of decent young people.

“Only once I have got to know the school will I be in a position to form any views about how we all take the school forward.”

Ms Kerr-Dineen gained an MA in English at Trinity College, the University of Cambridge.