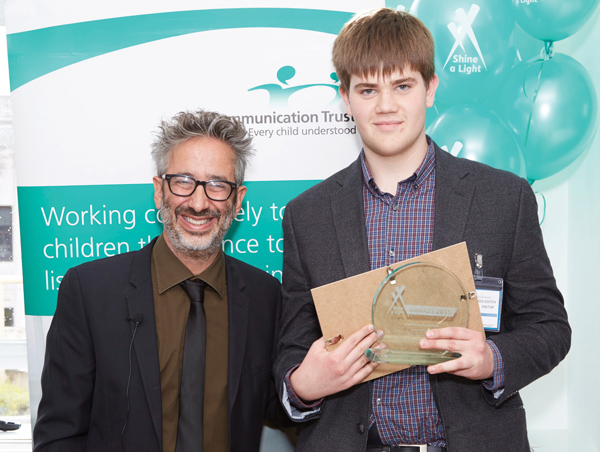 A 17-year-old student who has battled the odds to further his education was among a host of winners at the 2015 Shine a Light Awards last week.

Jonathan Middleditch from Surrey was one of 20 winners acknowledged by comedian and author David Baddiel at a ceremony hosted by sponsors Pearson at their London headquarters.

Jonathan won the young person of the year award. A pupil at specialist school Moor House School and College in Surrey, he has severe specific language impairment, dyspraxia, dyslexia and dyscalculia, resulting in unintelligible speech.

He has, however, gained two GCSEs and, through his ability to explain his skills and experience with confidence in an interview, now has a place on an agriculture course at a mainstream college.

Jonathan also became an integral part of Moor House School’s successful bid for a £90,000 grant to develop a specialist system to enable other pupils to access support.

He also has a tractor and trailer licence and achieved functional skills qualifications in English and maths.

David Baddiel said: “Speech and language problems too often go under the radar, so everyone should not only be congratulated for their work but for bringing this important issue to the attention of others.

“Well done to all those shortlisted who have shown true grit and determination to better themselves and others. They are all a true inspiration — keep up the good work.”

She was acknowledged for her efforts developing an early-years’ intervention programme, Building Blocks for Language.

In addition to holding down a full-time job as an early-years’ practitioner and family support worker, she used her spare time over the past year to focus on the programme, which supports the needs of two-year-olds identified with speech, language and communication needs (SLCN) in North Yorkshire.

Chris Hall, managing director of Pearson, said that the applications to the awards “get stronger and more inspiring each year. We have seen examples of children and young people with SLCN being supported by some truly remarkable individuals and groups.”

Anne Fox, director of The Communication Trust, who partner with Pearson for the awards, also congratulated the winners whose work, she says, will “help inspire and motivate people right across the country.

“They have shown what can be achieved when children and young people, who often struggle to communicate, are given the support they so richly deserve – support that can make a real difference to their life chances.”