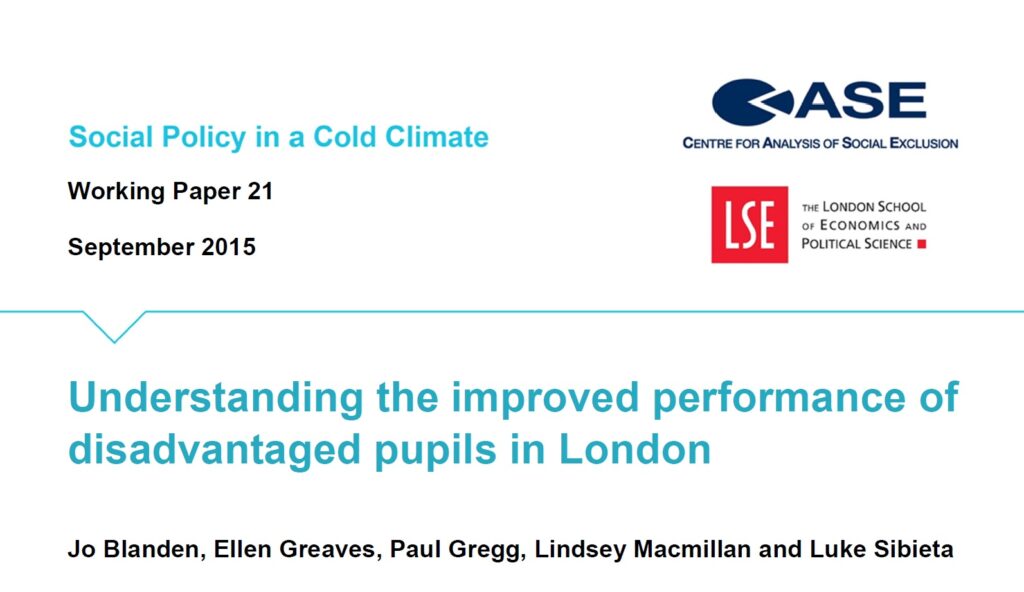 The success of London schools is down to improvements in school quality rather than schemes such as the London Challenge, a new report suggests.

Research published today contradicts previous findings which attributed the London Challenge as a major factor in the successful turnaround of schools in the capital.

The work, by researchers at the Centre for Social Exclusion at the London School of Economics and the Institute for Fiscal Studies (IFS), found the “London effect” for poor children started in the mid-1990s.

Their research found that, in 2002, 22 per cent of children on free school meals in London gained five or more A*-C GCSEs, including English and Maths.

By 2013, this had risen to 48 per cent and the report found that, in the same period, there was less improvement in disadvantaged children outside London – from 17 per cent to 26 per cent.

The London Challenge was started in 2003 by then education secretary Estelle Morris.

The founding of Teach First and high-profile policy changes leading to the growth of academies, which have also both been attributed as contributing factors to improved success, were also introduced in the early 2000s.

The report authors state, instead, that the “main explanation” for improved GCSE results was that disadvantaged children are entering secondary school with better key stage 2 results.

“Our research shows that these improvements are not down to a single policy or factor. Instead, most of the improvements reflect gradual increases in the quality of schools stretching back to the mid-1990s.

“London’s primary schools have become particularly successful and London’s great secondary schools can then build on this success.”

Researcher Jo Blanden, of the University of Surrey, said: “London’s schools have become extremely good at helping poor children succeed. This is despite the incredible diversity of their pupils. This success is likely to lead to better jobs and more social mobility among those educated in the capital.”

Responding to the report, the National Union of Teachers said it believed the London Challenge was a major factor to schools’ success.

Deputy general secretary Kevin Courtney said: “No one factor can be credited for the success of London’s schools as measured by test and examination data.

“However it is clear that the London Challenge played a significant role in embedding the success that London’s schools have been able to sustain since the start of the Challenge programme in 2003.”