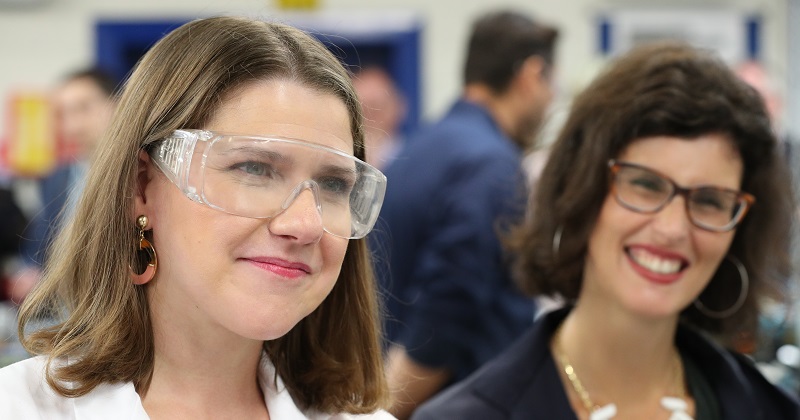 The Liberal Democrats will halve the amount schools pay towards high needs provision, abolish the EBacc and force all headteachers to adopt gender-neutral school uniform policies, the party has pledged in its manifesto.

Currently, schools have to pay the first £6,000 of the cost of additional support for pupils with education, health and care plans (EHCPs). Under a Lib Dem government, this would fall to £3,000, and extra cash would be allocated to local authorities to make up the shortfall.

The release of the full manifesto comes after Jo Swinson’s party announced plans to boost teacher numbers by 20,000 as part of a move to raise the schools budget by £10.6 billion over five years.

The document confirms plans trailed yesterday to match the Conservatives’ pledge of a £30,000 starting salary for teachers, and guarantees a 3 per cent annual pay rise for all state school teachers between now and 2024-25.

It also reaffirms commitments made by the party at previous elections or since to replace Ofsted, scrap SATs and replace them with teacher assessments and introduce a “curriculum for life” including compulsory citizenship and financial education for all schools.

Here are the main pledges relating to schools.

The manifesto states that the party will require inclusive school uniform policies “that are gender-neutral and flexible enough to suit different budgets”.

The Lib Dems say they will also provide training for school staff on how to review and improve their uniform policies.

On the issue of school accountability, this manifesto goes further than previous iterations.

This time, the Lib Dems said they will protect the availability of arts and creative subjects in the curriculum and “act to remove barriers to pupils studying these subjects”, including by abolishing the English Baccalaureate.

The performance measure has been blamed for a decline in the proportion of pupils taking arts subjects, because it incentivises schools to focus on academic disciplines.

This will be done with an “immediate emergency cash injection” as part of a £10.6 billion rise in the overall school budget

The party has also pledged to “end the crisis in special educational needs and disabilities funding” by allocating additional cash to councils to halve the amount that schools pay towards the cost of a child’s education health and care plan.

The Lib Dems have matched the Conservative pledge of a £30,000 starting salary for all teachers, who will also get a guaranteed 3 per cent annual pay rise if they form a government.

The party also wants to bring in an entitlement to 50 hours of fully-funded continuing professional development for all teachers by 2025.

Ofsted will be replaced with a new “HM inspector of schools”, which will conduct inspections of both state and independent schools every three years.

The party says the regime will consider “a broader range of factors” than Ofsted does currently, including “the social and emotional development of children, and the wellbeing of staff and pupils”.

The Lib Dems have also promised to give parents “school performance measures they can trust”, by replacing  current league tables with “a broader set of indicators including information about pupils’ and teachers’ wellbeing, as well as academic attainment”.

According to the manifesto, the party will end “teaching to the test” by getting rid of SATs and replacing them with a “formal, moderated teacher assessment” at the end of each phase of education “and some lighter-touch testing”.

All three of these policies have featured in some guise in previous manifestos or been announced by the party since.

This pledge was also made in 2015 and 2017. It involves rolling out citizenship and financial education to all schools including academies.

The manifesto also pledges to make schools “teach the core skills required for children to flourish in the modern world, including critical thinking, verbal reasoning and creativity”.

The Lib Dems say schools will also teach about how to use social media responsibly and provide advice and support for parents on how to help their children protect themselves online. This sort of content is already in new relationships and sex education content due to be taught in all schools from next September.

7. Give councils more powers over academies

As in 2017, the Lib Dems are promising to give councils responsibility for admissions and exclusions at all schools. The party’s intention is that councils will act as “strategic education authorities” for their areas.

Lib Dems in government will also oppose “any future expansion” of grammar schools and devolve all capital funding for new school spaces to local authorities.

Another pledge from 2017, the Lib Dems said they will extend free school meals to all pupils in primary schools.

This manifesto does go slightly further in that it pledges to give free meals to all secondary school pupils whose families receive universal credit. This follows a move by the Conservatives to remove provision for some UC claimants.

According to a costings document supplied alongside the manifesto, this policy will cost £1.16 billion in 2024-25.

The party also says it will “promote school breakfast clubs”.

All teaching staff will be trained to identify mental health issues, and schools will provide “immediate access for pupil support and counselling” if the Lib Dems gain power.

The party also wants a specific individual responsible for mental health in all schools, which would in turn have a statutory duty to promote the wellbeing of their pupils.