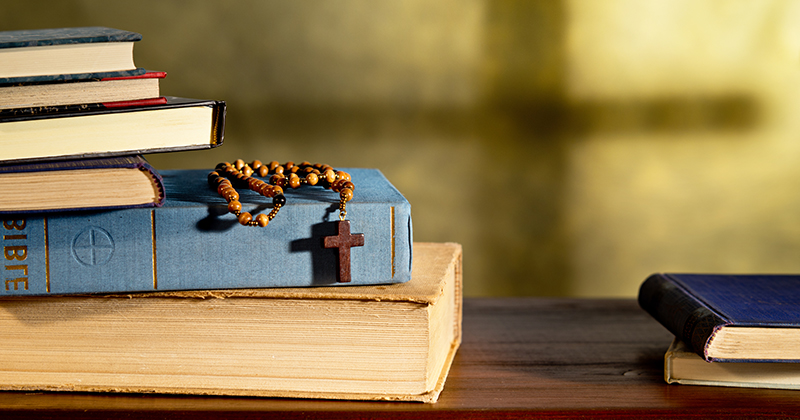 “I want my pupils to come out as good theologians, just as history teachers want their pupils to become first-rate historians”

Some campaigners have an ulterior motive in pushing for a national RE curriculum – they know it would cause Catholic schools to close, argues Andy Lewis

Despite their historical contribution to this country, there has always been opposition to Catholic schools in one form or another. Whether motivated by anti-migrant racism, establishment anti-Catholicism, or ‘liberal’ secularism, hostility has been something Catholic schools have had to live with.

However, those who want to abolish Catholic schools have a problem: they are consistently high performing and popular with parents of all religious backgrounds – so there is no appetite from government for forcibly closing them down.

This means the only options left to their opponents, is to try and dilute the Catholic character of the school so much that it loses its faith-identity entirely. The field in which this is currently taking place, is religious education.

RE is at the core of what Catholic schools are about and, as stipulated by the country’s Catholic bishops, ten per cent of curriculum time is dedicated towards it. The bishops’ RE curriculum followed in all Catholic schools is broad, critical, academically rigorous, and produces theologically literate young people. To this extent, Catholic school pupils account for a fifth of all GCSE RE entrants, and year after year consistently outperform the national average.

The same cannot be said for RE in all state schools. Recent studies have shown a declining number of people taking religious studies GCSE, and a significant number of schools were found not to be teaching it at all.

There is so much concern about the quality and provision of RE that not only have we seen numerous reports published on it – the most recent being the revised report by Charles Clarke and Linda Woodhead – but a commission has been put together to look at how to reform the subject.

However, rather than look at one of the few sectors where RE is done very well (the Catholic sector) and emulate it, such reports tend to develop recommendations or statements that do not reflect the best current teaching of RE.

Catholic schools take a distinctively theological approach to RE. It’s an approach that starts from the position that God exists – or there are people who genuinely believe God exists – and that the job of the theologian is to look at the truth-claims of religion as well as the human interpretation of the divine. It is essentially an appropriate, school-level study of the great academic tradition that continues today at university. As an RE teacher I want my pupils to come out as good theologians, just as my history teacher colleagues want their pupils to become first-rate historians.

In terms of the academic integrity of RE, politically-motivated reforms could severely damage the subject – in other words, the quality of religious education will not be improved by teaching less religion.

A Catholic school, which is provided and part-funded by the Catholic community, should be able to teach Catholicism in the method in which it sees fit, not at the government’s direction. This is non-negotiable for Catholics, and we have always been very clear on this.

I have no doubt that organisations that want to reform RE have good intentions, but they need to be aware that if they wish to recommend measures knowing that they would force the closure of Catholic schools, their impartiality and judgment will be severely called into account.

In Britain today, we have a pluralistic approach to teaching RE, which allows all schools to approach the teaching of religion in a manner in which they see fit. Yes, there is a problem with RE provision in some state schools, but rather than buy into the anti-faith-school argument of dumbing down the subject to a series of ‘world views’ – or even removing it altogether – policy-makers need to look at the schools doing it well and see what others can learn from them.

There is no doubt about it, theologically literate young people are essential to creating a more tolerant society. It would be the cruellest irony therefore if the subject were destroyed because of an intolerance of the Catholic faith.