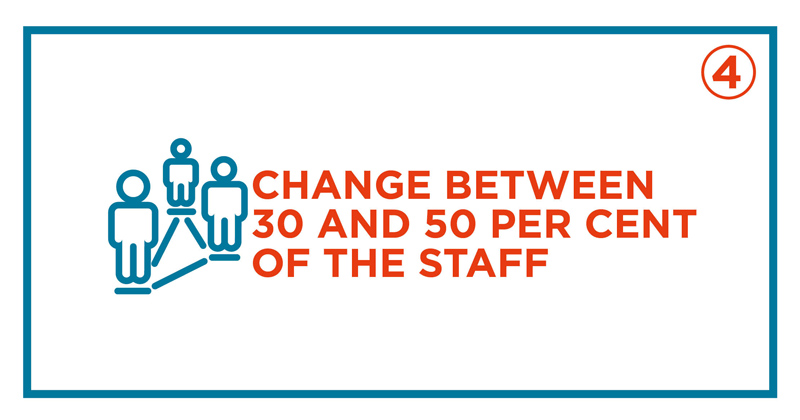 Heads need to change between 30 and 50 per cent of the teaching staff at a failing secondary school in their first three years if they want to see a successful “culture shift”, according to new research into the behaviour of successful turnaround heads.

The research hasn’t pleased everyone, however, and teaching unions have shot back, saying headteachers need to make it a “primary aim” not to fire anyone when improving a school.

Mass changeover of staff is one of nine strategies successful heads use to improve schools, identified by researchers Alex Hill and Ben Laker on behalf of the Centre for High Performance.

And while they admitted that new heads were generally successful if they adopted just six of the strategies, in an article for the Harvard Business Review, the pair insisted that changing how a school works “usually means changing staff”.

They reached their conclusions by analysing decisions made by 62 heads who saw the C grades their students earned at GCSE increase by 45 per cent or more over eight years at failing schools.

Changing less than 30 per cent of teachers made little impact on staff culture, they found, but a turnover of more than 50 per cent “created too much disruption”.

They were clear to point out that churn doesn’t just mean job-losses: around half of turnover comes from new recruits, with a quarter from firing supply teachers, and the rest made up by firing underperforming staff.

To achieve a 30-per-cent change, only 7.5 per cent of permanent staff have to leave their jobs, said Hill – and a third of those are typically on long-term sick leave.

However, Nansi Ellis, the assistant general secretary of the National Education Union, said heads should be aiming to turn schools around “without managing out anyone”.

Supportive approaches can “reinvigorate teachers who may be struggling to cope”, she said, and work better than “simply weeding out staff”. There may be some teachers genuinely in the wrong job but this requires careful thought. READ MORE: Governors! Here’s how to tell if your turnaround head is effective

Laker and Hill found the most successful heads also shift staff culture by clarifying key indicators of improvement. Some even display pupils’ attendance, behaviour and test scores in real-time on video screens in corridors and staffrooms, so teachers can see where improvement was needed.

Geoff Barton, the general secretary of the Association of School and College Leaders, welcomed many of the findings, but warned all school leaders to remember they have a duty of care to staff on long-term sick leave.

Supply teachers are also “easy to stigmatise”, he said, and headteachers should seek to get them on contract if they are capable.