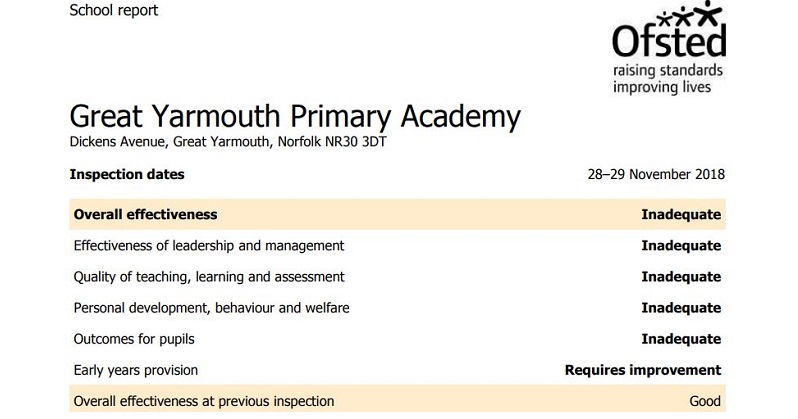 Inspiration Trust has slammed Ofsted inspectors that it claims “don’t understand the data” after one of its primary schools was placed in special measures.

The school was the first taken over by the trust, founded by academies minister Lord Agnew, and had been rated ‘good’ at its last inspection in 2014.

The trust sought legal advice on challenging the report, and was told there was a “case to argue”, de Souza said.

But she added it would cost around £100,000, money the trust is “not prepared to divert from front line teaching”.

“Instead, we will continue to fight this seriously flawed report through Ofsted’s internal procedures – and focus the trust’s resources on helping our pupils and supporting our recently joined new principal and the dedicated staff at Great Yarmouth Primary Academy.”

But de Souza said the trust was “forced to raise a formal complaint about inspectors’ attitude to safeguarding during their visit” and accused the inspection team of having “made mistakes from the very beginning”.

“As a trust, we have seen some really good Ofsted inspectors offering astute, professional challenge to schools, and it is right they keep us on our toes. We have sadly also seen inspectors who don’t understand the data, and seem to walk through the doors determined to reach a particular judgement come what may.”

This is not the first time Inspiration Trust has criticised Ofsted. In May, Schools Week reported that the trust received a softened report after it complained about a damning inspection of Cobholm Primary Academy. The watchdog subsequently came back after just four months, rating the school ‘requires improvement’.

However, although Ofsted described the curriculum as “coherent, well planned and based on worthy intent”, inspectors said teachers at Great Yarmouth Primary Academy were “not well trained to deliver the curriculum. They frequently lack the expertise to ensure pupils make adequate progress.”

The new maths curriculum, for instance, was “not well understood by teachers”, Ofsted found. “This is evident when teachers read from a given script and pass over tasks they do not understand.

“They do not take time to explain links between the calculations pupils complete, which hinders pupils’ understanding. Some teachers are yet to be convinced of the value of this curriculum. Teachers worry that the most able pupils are not sufficiently challenged.”

Inspiration, in its response today, said it had spent £2 million on development, resources and training for its new curriculum.

But inspectors found: “Any improvements to teaching, learning and assessment to implement the curriculum have been insufficient to improve the standard of education in key stage 1 and key stage 2.

“Attainment at key stage 2 has been low for the past two years and shows little sign of improvement.”

Leaders have also not “demonstrated their capacity to improve the school” and Ofsted criticised them for being “unrealistically generous” in their evaluation of the school’s effectiveness.

Ofsted also found that “fixed-term exclusions are high and not reducing”. Five pupils were excluded for “all or part of the inspection”, with 141 days in school missed due to fixed-term exclusions in the previous academic year. Since September 2018, there have been 44 exclusions, inspectors found.

A spokesperson for Ofsted said all complaints about inspections are “thoroughly investigated”, but said the inspectorate “has a duty to serve parents and pupils by reporting exactly as we find when we inspect schools”.

“We acknowledge that this school is experiencing changes in their leadership. However, its pupils’ behaviour and educational attainment are simply not good enough.

“We understand the significant impact our judgements can have on a school, staff, pupils and the local community, and we know it is particularly difficult when a school is judged ‘inadequate’. But we do not make such decisions lightly. When a school is placed in special measures or serious weakness, the inspection report is subject to additional checks, to ensure the judgements are firmly supported by evidence.”