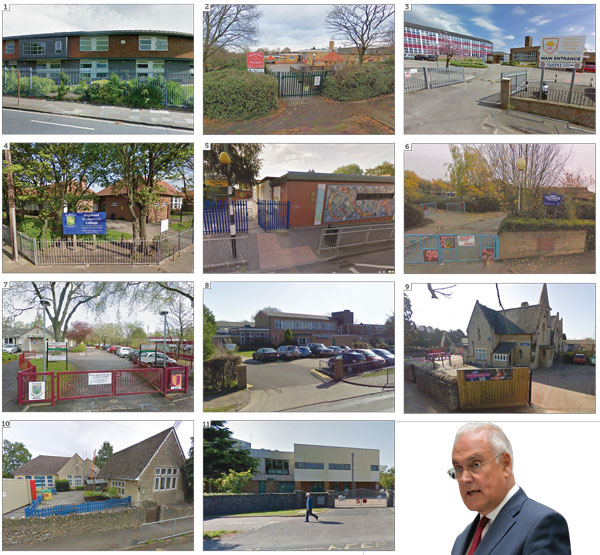 Snap inspections in the past two months have shed light on Ofsted’s approach to inspecting “British values”.

In a wave of 35 no-notice inspections in September and October, Ofsted found that 11 schools “were not preparing pupils for life in Britain today”. Ten of those schools were downgraded.

In a letter to Education Secretary Nicky Morgan, Ofsted chief Sir Michael Wilshaw said inspectors had either found evidence that the 11 schools were not teaching pupils respect for the mix of faiths in Britain today, or were not adequately developing pupils’ awareness of communities different to their own. The 11 schools and how they fared

Since September, and in light of Birmingham’s Trojan Horse affair and a change in the handbook for inspectors, Ofsted has specifically considered whether schools are “actively promot[ing]” British values.

Six of the 11 schools that Ofsted said were not preparing children for life in Britain were primaries; the rest were secondaries.

Speaking after the publication of Sir Michael’s letter, the head of the ATL union said that Ofsted’s new focus on British values was causing confusion. Mary Bousted said: “There is massive confusion in schools about what fundamental British values are.

“In these cases, where a school goes from good to inadequate, it seems to be a case of Ofsted moving the goalposts, and going in and causing headlines.”

Analysis by Schools Week highlights some of the reasons why schools are considered to be failing these requirements.

In the case of St Edburg’s Church of England (VA) School, in Oxfordshire, inspectors found that “pupils are not always aware that they live in a multicultural society”. This came despite their finding that pupils’ spiritual, moral, social and cultural development was being promoted “very effectively”.

But the inspection report said: “While their cultural development is promoted adequately through the teaching of religious education and other subjects, pupils lack depth in their understanding of different religious, ethnic and social groups in society and abroad.”

The school’s failure to carry out a “central audit”, evaluating how well “pupils’ understanding of British values such as democracy, the rule of law and individual liberty” was being developed, was also commented on.

In other cases, schools were criticised for failing to do enough to foster respect for different social groups. The Charles Dickens School, in Kent, was told that it was “not a community in which people’s differences are sufficiently valued and respected”.

Later the report said: “There is too little planned, high-quality teaching about how differences in, for example, sexual orientation or ethnic heritages, are valued and respected.”

Of the 11 found not to be preparing pupils for life in Britain today, three were faith schools – one Jewish, one Roman Catholic and one Church of England.

While Ofsted grades were reduced in 10 of the schools – for reasons other than just their teaching of British values – Stanton St Quintin Primary, in Wiltshire, retained its good rating, despite Ofsted saying that to improve further, it must “draw pupils’ attention to what life is like in modern Britain”.

Note: Today, and after going to press, the Department for Education published “advice outlining maintained schools’ obligations in promoting fundamental British values.” However, the guidance states “this advice should not be read as guidance for inspection purposes. Ofsted publish their inspection framework and handbook, which set out how schools are assessed in relation to pupils’ spiritual, moral, social and cultural development. Schools should refer to Ofsted’s documents to understand what inspectors look for in assessing this.”

School leaders are stressed by Ofsted at the best of times.

When there is confusion about what they are looking for, it gets worse.

In Ofsted’s latest round of no-notice inspections, 23 grades fell, eight remained unchanged and one improved.

Ofsted acknowledges problems with snap inspections, such as one headteacher not being available when the inspectors arrived.

Yet despite these “logistical drawback”, the chief inspector says he intends to extend their use in certain circumstances.

One criteria ripe for extension in the wake of the Trojan Horse affair is where Ofsted has “serious concerns about the breadth and balance of the curriculum”.

Of the schools visited, Ofsted says this was the case for 17 schools, of which 11 “were not preparing pupils for life in Britain today”.

Analysis by Schools Week of these 11 reports sheds further light on what Ofsted did or didn’t find, but are teachers clear on what Ofsted mean by “life in Britain today”?

Mary Bousted, the boss at the Association of Teachers and Lecturers doesn’t think so, which should concern us all.