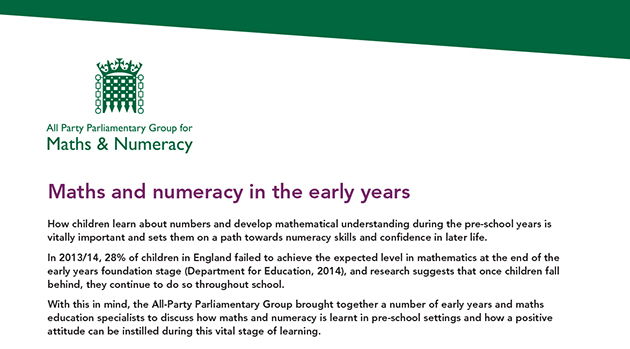 Politicians are calling for a “positive maths drive” as they say too many pre-schools and nurseries are failing to give children a good start in maths education.

The All-Party Parliamentary Group (APPG) for Maths and Numeracy, which has 25 members drawn from the House of Commons and House of Lords, in its first report said there needs to be a better trained and qualified workforce which “inspires a ‘can-do’ attitude”.

The group also thinks there needs to be more support for parents in teaching children maths and this should include a national awareness drive of the subject’s importance at early years.

Members are also critical of the current early years’ foundation stage framework. Despite maths being included, they say: “there remains a concern that there is much emphasis on ‘counting on’ and rote learning, at the expense of developing early number sense and understanding the meaning of numbers.”

The report, which is not approved by the House of Commons or its committees, said in 2013/14, 28 per cent of children in England failed to achieve the expected level in mathematics at the end of the early years’ foundation stage.

Caroline Dinenage MP, APPG co-chair, said: “Far too many young children in this country struggle with maths and numeracy.

“This leaves them playing a game of catch up for the rest of their lives; a game most of them end up losing.

“As this report sets out we need a greater focus on maths and numeracy in the early years. If we can provide children with a good grounding at a young age then we will set them up to succeed in their later studies and their future careers.”

The APPG’s report was supported by the charity National Numeracy and the accountancy body ICAEW.

National Numeracy chief executive Mike Ellicock said: “We really do need a drive to create more positive attitudes to maths so that early years staff – and parents – pass on the right messages.”

Mark Protherough, ICAEW executive director for learning and professional development, said: “By inspiring children from a young age not just to count numbers, but understand them, you can help to develop savvy thinkers who can solve problems.

“ICAEW urges the Government to better support teachers and parents and increase its focus on improving mathematical development from a young age.”

Reacting to the report, Russell Hobby, general secretary of school leaders’ union NAHT said: “NAHT supports the recommendations made by the APPG but there are no quick fixes. Teaching maths is demanding.

“It requires careful thought in ordering, pacing and the balance of concrete and abstract skills. It requires inspirational and talented teachers to make the subject come alive.

“In July the government announced a new network of thirty two maths hubs across England. Anything that can improve our teaching of maths is welcome, particularly if it focuses on developing and equipping teachers.”

“The early years of a child’s life influence how well they do at school and beyond. It provides the framework for them to develop academically – including in mathematics.

Our plan for education includes providing more flexible, affordable and good quality childcare. A record amount of money now goes to support the youngest children and more families than ever before are eligible for free childcare.”

The report is being launched today in the House of Commmons and will hear from Nick Boles MP Minister of State for Skills and Equalities, APPG co-chairs Barry Sheerman MP and Caroline Dinenage MP, television personality, Johnny Ball and Stephanie Cracknell from Mathemagical.