Founders of the first ever festival celebrating special educational want to “bring teachers and families into the same space” and hope more mainstream teachers will attend their next event.

Barney Angliss, a SEND consultant, has spent two years planning FestABLE, which took place in Cheltenham last weekend. He had the help of Elaine Gisby, director of staff at the specialist National Star College, where the festival was held.

Around 400 attendees listened to expert speakers, attended workshops on everything from language acquisition to storytelling, and took part in activities including a “circus-themed immersive sensory space”, and sports like boccia and polybat.

The festival had three main aims: firstly, to bring teachers, therapists, solicitors and other SEND experts into the same space as families and pupils.

“There are lots of conferences for professionals, but nothing which seemed to include the young people and families,” Gisby told Schools Week.

“Everyone’s always saying how you can overcome anything if you have disabilities, but actually people often forget that for parents, it can be an ongoing fight. If they can get together with professionals and feel positive, that’s great.”

Secondly, organisers aimed to scrutinise the impact of policy, including the Children and Families Act 2014, which brought sweeping changes to the way SEND support is delivered four years ago. In order to facilitate debate about policy, the event will now take place every two years, with the next in 2020.

“We want to allow those issues to develop across the country, and then we’ll be the place for leading-edge debate,” Angliss said.

In Cheltenham, opinion was divided on the reforms, which saw education, health and care plans introduced to replace statements of SEND.

Simon Knight, director of Whole School SEND, acknowledged that some of its intentions were admirable, such as bringing together the educational, health and social care needs of an individual into one plan.

But André Imich, SEND professional adviser at the Department for Education, provoked a backlash when he claimed the reforms enabled parents to be involved in decision-making. Delegates warned that participation had involved them leaving their own jobs to navigate the lengthy referral system.

“Everyone’s always saying how you can overcome anything if you have disabilities, but actually people often forget that for parents, it can be an ongoing fight”

The third aim of the festival was a celebration. As George Fielding, a director with cerebral palsy at SEND charity Adjuvo said, the best thing any reform can do is “give people with disabilities a blank piece of paper, to decide how to define themselves”, because that is “true empowerment”.

Festivities were led by the comedian and actor  Sally Phillips, famed for her roles in sketch show Smack the Pony, the Bridget Jones films and sitcom Miranda. She has been an outspoken campaigner of SEND services as a result of her son’s Down’s Syndrome.

“She was perfect, because although Sally is a celebrity, she was there as a parent of a child with complex needs, on stage but directly connecting with the audience,” said Angliss.

However, both organisers wished more teachers from mainstream schools could attend.

“We tried to contact the SENCo in most schools, but I suspect a lot ended up in inboxes and people feel they’re too busy,” said Gisby.

“Lots of mainstream professionals will think ‘that looks fantastic, but I’ll never use that degree of specialised knowledge’. It’s our job to challenge that, and encourage those teachers to come along,” Angliss continued. 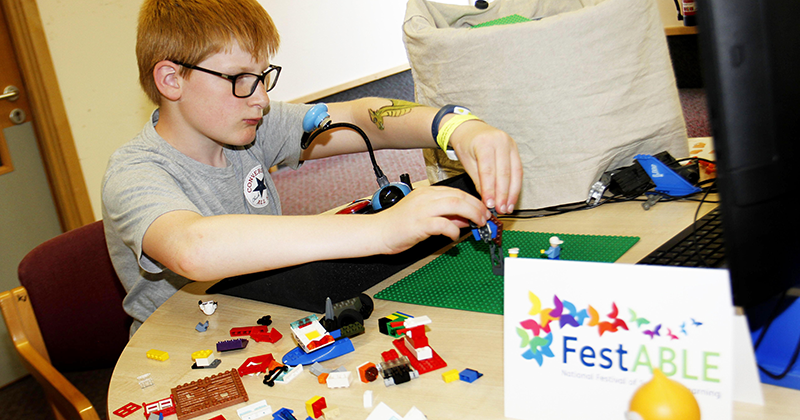