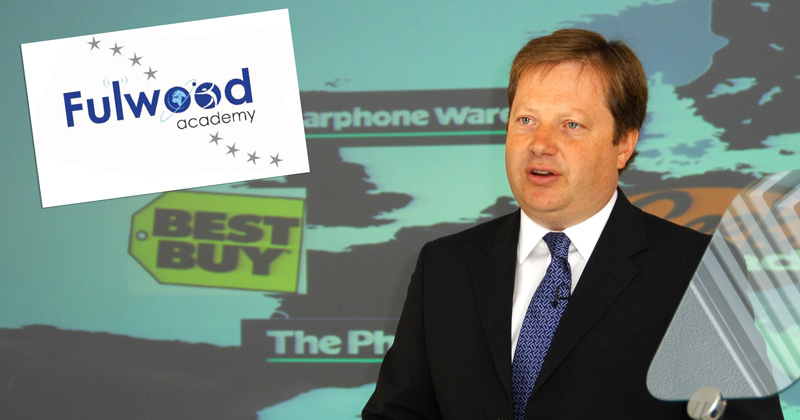 An academy in Preston was rated inadequate and criticised for its “embryonic” curriculum plans – despite receiving £1.8 million from its multi-millionaire sponsor to focus on computing and digital technology.

Ofsted rated Fulwood Academy inadequate across the board after an inspection in February criticised its “unacceptable standard” of education, ineffective leadership and “extremely poor behaviour”.

The report, published on April 30, said the school’s new curriculum was “at an ‘embroyonic stage’”, adding: “The sponsor’s vision for the future curriculum is to focus on computing and digital technology. He has pledged a substantial amount of capital investment into the school to support this.”

The school is sponsored by Sir Charles Dunstone (pictured above), who co-founded Carphone Warehouse with David Ross, head of the David Ross Education Trust.

However, Ofsted said that Fulwood’s plans for implementing this curriculum were “vague” and it was “concerning” that school leaders were “so uncertain about what the curriculum for all pupils will look like from September 2019”.

The trust is now moving to a new curriculum “focused on delivering powerful knowledge”.

Philip Grant, the new principal, told Schools Week that Fulwood’s knowledge-based curriculum would be delivered through “principles of instruction, classroom oracy, high-quality resources and well-designed assessments”, with “high level 21st-century technology” phased in over the next three years.

Grant, who started on the same day that Ofsted visited, said that Dunstone and other trustees “have an input in the curriculum” but were “guided and advised” by school leaders.

In 2011 Dunstone became the UK’s first digital billionaire after the demerger of Carphone Warehouse and TalkTalk. According to the 2018 Sunday Times Rich List, his fortunes fell by £28 million last year, although he is still worth £918 million.

Dunstone and Ross are among a handful of multi-millionaires who have poured substantial sums into schools after founding academy trusts.

An investigation by Schools Week in 2016 found nearly £20 million in charitable donations had been handed over to just 12 academy trusts from 2014-16.

Others donors include Lord Philip Harris, the founder of the flooring retailer Carpetright and sponsor of the Harris Federation, Alan Howard, a hedgefund co-founder, who donated £5 million to United Learning in July 2014, and Lord Agnew, the academies minister, who founded Inspiration Trust.

But there are concerns over the level of influence such donations bring.

The Guardian reported in 2016 that the daughter of Lord Nash, the founder of the Future Academies trust, had been appointed to help draw up a new curriculum, despite being unqualified as a teacher.

Grant said that Fulwood “is in a very sound financial platform and it’s envisaged that Sir Charles will continue to invest in the academy for special projects and to enrich the curriculum”.

Dunstone added that the school was “committed to delivering a first-class education and preparation for adult life” and “is already a different school to the one visited by the inspectors”.

Ofsted said reasons for the delay in curriculum planning included the responsibility falling to a new vice-principal who was not due to start until Easter, with a range of subjects linked to a proposed staffing restructure.

The education watchdog has pledged that school curriculum will be the “central focus” of its new regime, due to start in September.