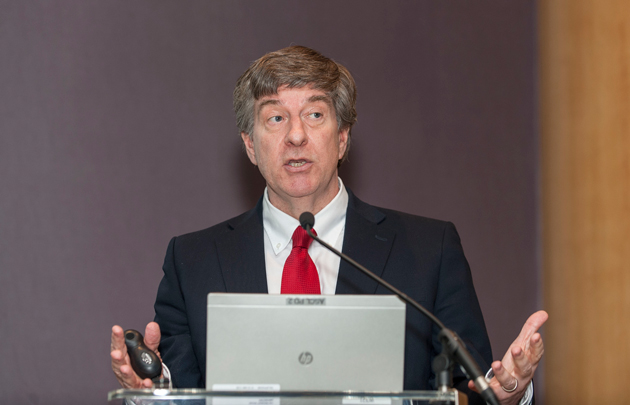 England’s new schools commissioner Sir David Carter has insisted he is not Nicky Morgan’s puppet and that he has the full support of government for his plans to improve schools.

Speaking exclusively to Schools Week at the Association of School and College Leaders annual conference in Birmingham last week, the former regional schools commissioner (RSC) for the south west and ex-Cabot Learning Federation chief executive insisted he would be allowed to “get on with the job”.

Schools Week previously reported that the Department for Education was blocking the commissioner from answering questions on his plans for a hierarchy of academy trusts and for avoiding conflicts of interest.

Sir David wants to tackle school improvement through different layers of trusts, based on size. Chains wanting to take on more schools and move between tiers will need a “health check”.

He also wants to identify the 100 weakest academies and start intervention quickly.

“If I thought I was a puppet, I wouldn’t have taken the job,” he said. “I was really concerned that it wasn’t an ambassadorial, figurehead role. When I was interviewed
for the post, the priorities I have talked about for the past two months were the ones that I put on the table.”

Sir David (pictured), a former head of Deer Park School in Cirencester, said there was a “clear desire” for him to talk regularly to the press, and “to be open and to communicate with people”. However his position as a senior civil servant meant he was duty-bound to support government views.

“I’m clearly not as independent as Michael Wilshaw and Ofsted does need to be independent, but I am very confident that, having been appointed to do this role, that people see the value of my experience and allow me to get on with this job.”

Asked whether he still held the view he expressed early in his tenure as an RSC – that the minutes and voting records of headteacher board meetings should be published in full – Sir David admitted he had backtracked slightly as sponsors might be discouraged from taking over schools if information about them was made public.

He said transparency had to be balanced against “the needs to protect the privacy of the people who are being discussed in the meetings”, and said he was worried that his “quest to be upfront” could result in the publication of information about sponsors’ “challenges and weaknesses”, which could discourage them from expanding.

Sir David said his team was avoiding potential conflicts of interest between external advisers – some of whom were from existing trusts or firms specialising in services such as recruitment and selling software – and the RSCs to whom they make recommendations for school improvement actions or academy takeovers.

While he admitted it would be naïve to say there wasn’t a risk of a conflict, Sir David said his office was “very skilled” in managing it by ensuring the 93 contractors were not deployed in geographic areas in which they already operated.

“In the south west, we deployed somebody who was on the list from a Bristol multi-academy trust (MAT) to work with a school in Poole, because that school has no intention of joining a MAT in Bristol and the MAT wouldn’t want to do that.”

But Sir David said he would be “very concerned” if anyone involved in the diagnosis of issues at a school went on to provide support to them in a professional capacity.