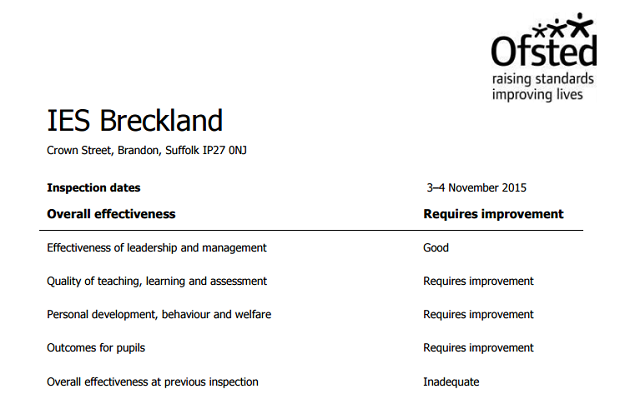 The only free school in England run by a for-profit company has come out of special measures after almost two years.

IES Breckland in Brandon, Suffolk, has been told by Ofsted that it no longer requires the intensive monitoring of the special measures category and simply “requires improvement”.

Following a visit earlier this month, inspectors said the quality of its teaching, learning and assessment, the personal development, behaviour and welfare of pupils and outcomes for learners still required improvement, but that leadership and management was good.

It comes after Schools Week reported that the school’s educational service provider IES International English Schools UK Ltd had cut its operating loss by almost 80 per cent in a single year.

The company’s turnover increased from £77,650 to £103,212 during the same period and, following revelations in Schools Week that debts of £307,369 owed to Swedish parent company IES Sverige AB were written off last year, only £76,725 of debt was written off in the latest financial year.

In its latest inspection report, Ofsted said principal Alison Tilbrook and her “effective” leadership team had overseen a period of “enormous improvement” at the school.

The school, its sponsor the SABRES Educational Trust and the IES company were also praised for their “productive partnership”.